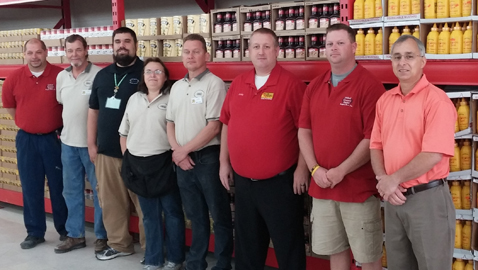 A concept that originated 40 years ago in the corner of an antique shop in East Tennessee has grown to 37 grocery outlets with locations in seven states.

This week, United Grocery Outlet has even more to celebrate as it holds the Grand Opening of its Chapman Highway store. The South Knoxville branch was originally located at 6021 Chapman Highway, but now will enjoy a larger space at 4225 Chapman. The new store will be called simply Grocery Outlet and will host local dignitaries, samples and the Mayfield cow this week in its celebration.

Matt Storm will be managing the new store and had managed the other Chapman Highway location.

United Grocery Outlet was founded by Doug, Carol and Michael Tullock in Etowah, Tennessee. The corporation, now based in Athens, Tn., has some 700 employees with stores in Tennessee, Georgia, Alabama, Kentucky and North Carolina. Store locations locally include outlets in Lenoir City, Alcoa, Clinton, Halls and Oak Ridge.

“It’s been an interesting journey,” he added.

Tullock, son of the owners of “The Bargain Barn” in Etowah, wanted his own part of the business. He drove to Stokley-Van Camp’s plant and purchased canned goods, tending his corner of their store after school. Within a short time his “grocery’ corner drove out the antiques and a thriving business was underway.

“We provide the lowest prices on brand name products and private label items, with no gimmicks, no cards and no coupons,” he said.

“We buy many closeouts and offer some tremendous prices and interesting and good products,” Tullock said. He went on to say that often they get products on a one-time basis and those become hugely popular but are hard to replace.

“Ruby’s Texas Chili is an example. We bought and sold truckloads of it and afterwards, for years, had customers asking about getting more,” he said, adding, “Sometimes we retail items less than it costs to manufacture them.”

“Trucks arrive every day and we often get products we haven’t had before,” he said.

“Often people will buy products by the case,” Tullock told The Focus.

“Many customers say “I shop you first and then go somewhere else.” The motto of the Grocery Outlet is “Shop Us First!”

UGO has been Tennessee’s Grocery Retailer of the Year twice in the past four years.

“We’re a zero landfill company,” he says, adding that some of the non-food items are recycled products and points to large rolls of shop towels. He said when he first carried them he was trying to figure out a way to sell them and decided to sell them by weight. He said the shop towels have been a standard product in the stores for the past 20 years.

“Our decision to purchase an item is based on value rather than variety. When we research an item, our goal is to pass a savings to the customer,” he said.