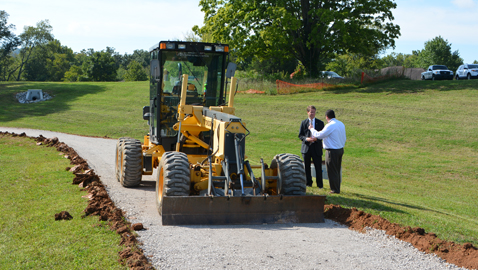 A Thursday morning ground breaking ceremony marked the beginning of a long-awaited greenway in the Halls Community.

The ceremony was held at the future site of the future Clayton Park, which will be located on Norris Freeway between Maynardville Pike and Emory Road. The greenway will connect Halls Middle and High Schools to Clayton Park.

Project Manager Chris Sivyer from Knox County Engineering said his department inherited the greenway project, which has been tabled for some time, from the Parks Department on Tuesday, just 48 hours before the ground breaking.

“It was brought to us Tuesday and I don’t know how long Parks had it,” Sivyer said. “We’ll hopefully get this thing done by the end of the year but that depends on the weather.

“It’s a good project for everyone involved and it will be especially good for the people of Halls.”

In July, the county was prepared to take ownership of property owned by TTC Halls, LLC to begin construction of the greenway and to protect a wetland area.

The greenway, however, encountered delays due to issues regarding wetland mitigation. The Tennessee Department of Environment and Conservation halted the greenway project while those issues were dealt with.

Much of the issues surrounding the wetland mitigation have been resolved and that permitted Knox County to proceed with last week’s ceremony.

Sivyer said he looks forward to undertaking the greenway project but he said that the construction would not be easy.

“We need to clear that area so we know what we have to work with,” he said. “An ideal time to do this would have been during the construction of the Wal-Mart.

“It’s not going to be the easiest project.”

Before construction begins, work crews must clear brush in the area, which has accumulated since the Halls Wal-Mart was completed.