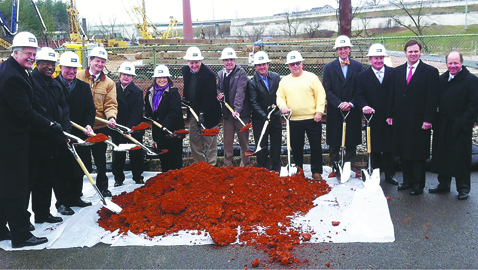 Last Wednesday, during an event organized by local developers, CHM, LLC, and attended by Knoxville business leaders and government officials, ground was broken in preparation for the building of University Commons, Knoxville’s first urban, vertical retail complex.
University Commons, a distinctive multi-story urban shopping and dining development located on the former Fulton Bellows site, will cover 12+ acres, with 211,000 square feet of retail space and parking.  Anchored by nationally recognized brands, Walmart and Publix, on property adjacent to the University of Tennessee, 40,000 more square feet will be dedicated to smaller retailers and service providers once the project is completed.
According to Mike McGuffin, a partner with CHM, LLC, the uniquely designed, urban retail complex will fill a grocery and retail void in the downtown and University areas, including providing grocery/supermarket services in what is considered a federally designated “food desert.”
“Residents in downtown and nearby neighborhoods along Alcoa Highway and Kingston Pike will all benefit from the convenience University Commons will provide, as will University of Tennessee students,” said Mayor Rogero. “And the whole city will benefit from the redevelopment of this former industrial property.”
Brian Hooper, vice president of real estate for Walmart, echoed Mayor Rogero’s sentiment.  “We are excited about the opportunity to bring added convenience to the downtown and University of Tennessee area of Knoxville,” said Hooper.
McGuffin projects that University Commons will have an approximate economic impact of $226 million on the Knoxville community and create more than 1,500 jobs. “We believe University Commons will be an excellent example on how public and private partnerships can create viable, economically sound projects for a community while enhancing the quality of life for its residents,” said McGuffin.
According to CHM, LLC partner, Jim Harrison, University Commons transforms a once non-productive real estate brownfield into a developmental asset while anchoring several other major public and private development efforts in the area including the Cumberland Avenue Corridor Project.  “Together, University Commons and the Cumberland Avenue Corridor Project will change a semi-suburban area, often used as a pass-through, into a safe and attractive urban district for the community,” said Harrison.
“University Commons and the Cumberland Avenue Corridor Project are great complements to each other,” echoed Budd Cullom, the third member of the Knoxville-based CHM, LLC development team.
According to the developers, Walmart and Publix are slated to open during the summer of 2014.