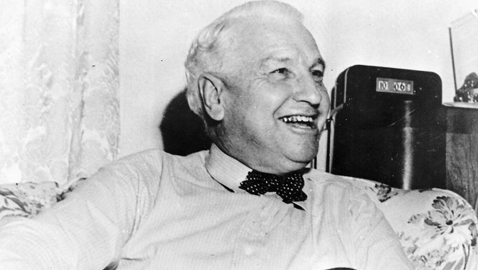 For modern readers it should become quite clear the voting patterns and political preferences of many states have been significantly altered over the passage of time.  One such state is Iowa, which was heavily dominated by the Republican Party for decades.  Most of the hard fought political contests in Iowa were waged by the progressive and conservative wings of the Republican Party.  For decades, the most successful Democrat in Iowa was Guy Mark Gillette.

The first thing one noticed about Guy Gillette was his appearance; he was an imposing man and was probably considered the one man in the United States Senate who most closely resembled the public perception of just what a senator is supposed to look like.  Gillette was tall, always well dressed and had a full head of lustrous white hair, which gave him the typically distinguished appearance of a senator.

Guy Gillette was born in Cherokee, Iowa on February 3, 1879.  Unlike most of his contemporaries, Gillette lived in the small town of Cherokee his entire life.  Even today Cherokee is but a town of some 5,369 souls.

Gillette attended law school in the much more metropolitan city of Des Moines, but returned to Cherokee to start his law practice in 1900.  Gillette volunteered for the Spanish-American War and rose to the rank of sergeant, but the conflict ended before he saw action.  Curiously, Gillette also volunteered to go to South Africa and join the Boers then fighting against the British, but his offer was politely refused.

Guy Gillette returned to Cherokee after the Spanish-American War and recommenced his law practice, while also dabbling in a few agricultural business pursuits.  He was the Cherokee County district attorney for two years and later won a seat in the Iowa State Senate.  Once again, Guy Gillette joined the army to fight in World War I, but returned to Cherokee by 1918.  Gillette attempted to revive his political career by campaigning for Iowa’s State Auditor in 1918, but was defeated.

It was another fourteen years before Guy Gillette would finally be able to resume his public service. He had the good sense or perhaps the good fortune to run for Congress in 1932.  Despite running in a district that had been reliably Republican, Gillette had the advantage of seeking office during the depths of the depression, which had made many Republican Congressmen highly unpopular.  Redistricting had left Iowa’s Ninth Congressional district without an incumbent and Gillette beat Republican nominee Edward Campbell decisively.  Two years later, Congressman Gillette managed to win by an even greater margin, winning more than sixty percent of the vote.

Guy Gillette’s elevation to the United States Senate came as a the result of a freak accident.  Richard Louis Murphy, like Gillette, had been elected in the 1932 Democratic landslide.  Senator Murphy and his wife, along with another couple, had been vacationing in Wisconsin for a week and while returning to Iowa, had an automobile accident.  Murphy was apparently driving when a rear tire blew out, causing the senator to lose control of the vehicle which plunged down a ravine and burst into flames.  Senator Murphy was badly hurt and was only removed from the car with great difficulty.  An ambulance was called and Louis Murphy was being taken to a hospital in nearby Chippewa Falls, Wisconsin when he died, as apparently broken ribs had punctured both of his lungs.

Louis Murphy had been a fiercely partisan Democrat and soon President Franklin D. Roosevelt had additional cause to regret Murphy’s passing, as Guy Gillette proved to be independent minded.  Senator Gillette did not mind dissenting from New Deal legislation and opposed at least one of FDR’s farm bills and the Wage and Hour bill.  Guy Gillette continued to vote against some other New Deal measures, but it was Gillette’s refusal to go along with Roosevelt’s plan to expand the U. S. Supreme Court that positively infuriated the President.  Senator Gillette’s opposition to the court-packing bill irked President Roosevelt, who was angry at those recalcitrant Democrats for having deserted him.  FDR stubbornly persisted with his plans to purge his own party of those legislators whom he considered to be sufficiently illiberal and the criteria was largely support for Roosevelt’s court packing plan.

Two important members of the New Deal administration were from Iowa. Secretary of Agriculture Henry A. Wallace was the son of a Republican who had been Secretary of Agriculture under Presidents Harding and Coolidge.  The other important FDR advisor from Iowa was Harry Hopkins, a social worker who had worked for Franklin Roosevelt while FDR was Governor of New York.  Hopkins had not lived in Iowa for decades, yet helped to recruit a primary challenger to Senator Gillette.  Hopkins settled on Congressman Otha Wearin to run against Gillette in the Democratic primary.  On paper at least, Wearin was an excellent choice to defeat Gillette.  Wearin was something a political prodigy, having been elected to Congress at age twenty-nine from a district that had never before elected a Democrat.  Wearin had been reelected in 1934 and 1936 and entered the primary with the full support of the Roosevelt administration.  Senator Gillette campaigned hard and stressed his independence, which apparently appealed to Iowa’s Democrats as he won renomination handily.  Otha Wearin would go on to seek office in the future, but his loss to Guy Gillette effectively ended his career.  Wearin did, however, achieve fame of a different kind, becoming a successful author and was later inducted into the Cowboy Hall of Fame for his writing.

The general election promised to be an even more difficult race for Gillette as he faced former Republican U. S. Senator Lester J. Dickinson.  Dickson had narrowly lost his seat in 1936 and had been a dark horse candidate for the Republican presidential nomination.  Dickinson was extremely conservative and attacked Gillette’s record from the right, which would have likely been more effective had Senator Gillette been more supportive of the New Deal.  The election was close, with Gillette winning by less than three thousand votes out of more than eight hundred thousand ballots cast.  Gillette’s victory was all the more notable due to the fact Republicans had made gains all across the country and he was the first Democrat ever to be reelected to the United States Senate from Iowa.

Guy Gillette had little sympathy for the British Empire and he was viewed by many as having isolationist tendencies.  Gillette’s second term in the Senate saw him opposing FDR’s bid to repeal the Neutrality Act.  Senator Gillette may have naturally harbored some resentment towards Roosevelt who had attempted to purge him from office and the Iowan was not supportive of FDR seeking a third or fourth term.

Gillette lost his reelection campaign in 1944 to Governor Bourke Hickenlooper and evidently relations between Senator Gillette and FDR were good enough for the President to appoint him to the Surplus Property Commission, which had the responsibility of disposing of the vast accumulation of materials left over from the war.  It was a position that had to be filled carefully, as there was ample opportunity for graft, yet Guy Gillette had a reputation in Washington for being a remarkably honest man.  Gillette did not enjoy his tenure on the Surplus Property Board and resigned after only having served for a few months.  Gillette’s honesty was much in evidence when President Harry Truman, a former Senate colleague, offered to appoint Gillette to a Federal judgeship.  Such a judgeship paid a handsome salary in addition to being a lifetime appointment.  Gillette candidly told President Truman he felt himself unqualified to serve as a member of the Federal judiciary, pointing out it had been many years since he had actively engaged in the practice of law.  It was an appointment very few politicians would have turned down for any reason.

Guy Gillette became President of the American League for a Free Palestine, an organization dedicated to creating a homeland for Jews worldwide.  Gillette relinquished his post in 1948 when the State of Israel was created and he was again running for the United States Senate.  Gillette was seeking Iowa’s other Senate seat, which was held by George A. Wilson.  Wilson had first been elected in 1942 and was also a former Governor of Iowa.  1948 was not thought to be a Democratic year in the least, with virtually every poll and political prognosticator in the country predicting the election of Thomas E. Dewey over President Harry S. Truman.

The Truman campaign paid special attention to the farm states, many of which Dewey had carried four years earlier when he faced the most formidable of Democrats, Franklin Delano Roosevelt.  Many farmers were disgruntled by the price of crops falling steadily, a circumstance that both Harry Truman and Guy Gillette hammered home with voters.  Truman himself made several appearances in Iowa and was drawing extraordinarily large crowds.  Truman campaigned for Gillette and told Iowans in his usual blunt fashion that if they failed to return Guy Gillette to the U. S. Senate there was something wrong with them.

And return Guy Gillette to the United States Senate, they certainly did.  In what had originally been thought to be a heavily Republican year, Guy Gillette defeated Senator George Wilson by more than 150,000 votes.  Until Tom Harkin was reelected in 1990, Guy Gillette remained the only democrat ever to be reelected in Iowa.

Senator Gillette won a seat on the Senate Foreign Relations Committee and remained popular with his constituents.  Although seventy-five years old, Gillette ran again in 1954 and entered the race as the favorite against Republican Congressman Thomas E. Martin.  Polls indicated Gillette would be reelected, but Gillette finally was upset, losing by a narrow margin.  One Gillette staffer recalled years later in an oral history that seeing the Iowa senator come into his office the day after having lost his seat with a look of anguish that was painful to see.  Guy Gillette soon regained his usual good nature and when his term expired, the former senator became Counsel to the Senate Post Office and Civil Service Committee. Later he served in the same capacity for the Senate’s Judiciary Committee.

Guy Gillette was about to retire in 1961 when author Allen Drury helped the Iowan to secure a small appearance in the filming of Drury’s best-selling novel “Advise and Consent,” which was filmed in Washington, D. C.  Naturally, Gillette played a part he had lived for many years: that of a member of the United States Senate.

Gillette finally retired to Cherokee, Iowa at age eighty-two.  The former senator was crippled by a stroke and confined to a nursing home, where he still received visitors.  His determination was indicated by his learning to use his left hand following his stroke, which had paralyzed his right hand.

Guy M. Gillette died a month after his ninety-fourth birthday on March 3, 1973.