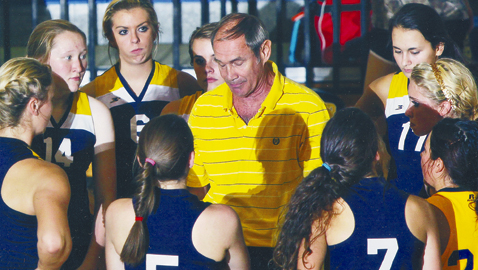 Ed Irvin instructs the Seymour Lady Eagles in 2011, his 28th and final season of a highly successful career as a volleyball coach. Irvin will be among 10 new members inducted into the Greater Knoxville Sports Hall of Fame on July 11 at the Knoxville Convention Center.

For years, Ed Irvin had a dynasty in high school girls volleyball.

It’s no wonder he was a unanimous selection for induction into the Greater Knoxville Sports Halls of Fame’s Class of 2013.

As a head coach in volleyball for 28 years, Irvin compiled a won-loss record of 723-327 and directed South-Doyle to the TSSAA Class A-AA state championship in 1991 – the only Knox County team that’s ever captured a state title in the sport.

A lot of his coaching career was a family affair as he coached with his wife Christie and they had three daughters – Megan, Marty and Mandy – who were all-state players at South-Doyle.

“They were a very successful team when I got there,” said Irvin. “My first practice was on a Monday, August 4, and our third daughter (Mandy) was born the day before on Sunday, August 3. Christie took off coaching for four years or so when our girls were so young.

“Christie was an excellent teacher as a coach. It was like we had two head coaches. I would always give her the young projects to work with. I certainly couldn’t have been as successful without her help.”

“All of our success was done with kids we trained,” said Irvin. “We never had an impact player move into our school at South-Doyle or Seymour.”

In the state title season, Irvin recalled being asked who to nominate off his team to be on the state all-tournament team.

“I couldn’t do that,” he said. “We didn’t have one who stood out above the rest. Everybody had a role.”

Another key to the success Irvin had South-Doyle High was the fact he was P.E. Teacher at South-Doyle Middle School from 1986 to 1996 and got to coach and prepare the sixth, seventh and eighth graders for the Knox County Middle School volleyball tournament, which was held in the spring.

“And then when we got them at the high school, they weren’t beginners,” said Irvin.

“I would get the best athletes and teach them the game of volleyball.”

Irvin had a test he used to gauge volleyball athletes. It consisted of the shuttle run to determine quickness, the vertical jump to measure leg strength and power, and a timed mile to evaluate endurance and condition.

Irvin said if an athlete had gained confidence from being successful in pressure situations in other sports that was an “added bonus.”

Irvin played club volleyball at UT in 1973 and was a player on the 1974 Knoxville YMCA team, which won the Region 5 tourney.

UT and the Knoxville YMCA team were co-hosts of the United States Volleyball Association national tourney in the spring of 1974., which was played at Stokley Athletics Center. California-Santa Barbara swept the collegiate and open division titles.

“We were the only team to beat them a game in a match,” said Irvin.