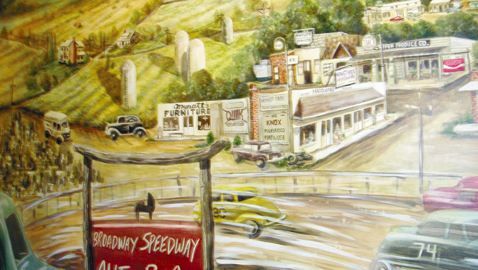 Photo by Mike Steely, Additional photos by dan andrews.
A look at an earlier Halls Crossroads can be found in the Knox County Clerk’s Office in Halls, depicting the development of the community. The mural is a surprise to many people and is much more extensive than shown here.

In the early days prior to Tennessee statehood, Emory Road ran east and west and Andersonville Road ran north and south. Where both intersected just north of Knoxville a thriving community was to develop.

Emory Road was built in 1787. It was one of the earliest and busiest wagon roads in the state. A little community, founded by Revolutionary War veteran Thomas Hall, grew at this intersection quickly. Hall, a, had been a prisoner of the British for two years after a battle in Charleston, S. C.

Hall had been given a tract of land on the north side of Black Oak Ridge by the U.S. Government for his service in the war where he eventually married and raised his family.  The Hall family opened the first businesses in the area: a store, inn and a blacksmith shop. Soon people began calling the settlement Halls Crossroads, for the meeting of what was to become Dixie Highway and Emory Road, now Maynardville Highway and Emory Road.

Today Halls Crossroads, more commonly called “Halls” by locals, is just across the hill where North Broadway becomes Maynardville Pike. Although not within the official Knoxville city limits, Halls is considered by most as part of the city, with Fountain City to the south, Powell to the west, Corryton to the east, and Maynardville to the north.

Halls Crossroads has grown and became a vital part of Knox County. It has six county schools, several banks, shopping centers, and various other shops and services. Halls Crossroads is also the home of the Hallsdale-Powell Utility District, the 4th largest utility district in Tennessee with more than 28,000 customers.  Some of the popular places of business inside the community include the Halls Cinema 7, Bel Aire Burgers, and the new Walmart Super Center. That kind of growth leaves some vacant buildings and there are efforts underway to get new business to rent or build.

The Halls Business and Professional Association is looking at grants to help revitalize parts of the community.

“I’d like to see us fill the old Walmart Shopping Center and get more people to shop in Halls,” said Bob Crye, President of the Halls Business and Professional Association. “We think Halls is unique.”

Although Knoxville has grown over the years to extend towards Halls Crossroads, Crye said that if Halls were asked if they wanted to be part of the city, they “would probably vote it down.”

“We probably have more “native” people than any other place in Knox County and we have an independent spirit,” he said regarding Halls Crossroads residents.

“I’d like to see Regal locate at the former Walmart center,” he said, adding that the Halls-based multinational theater company has stated they didn’t want to put the Halls Cinema 7, an independent operation, out of business.

Mike Campbell, founder and chairman of Regal Entertainment Group, is a former Halls resident and is proud to have his corporate headquarters there. Regal Entertainment operates the largest and most geographically diverse theater circuit in the United States, with 7,394 screens in 580 theaters in 42 states along with theaters in Guam, Saipan, American Samoa and the District of Columbia.

“I was born in Knoxville but was living in Claiborne County until 1988. I decided to move to Knoxville and to live in Halls since I had lived there for a number of years in the 1970s. When I started Regal in late 1989 I was very cost conscious and found a small rental space with a very low rent on Regal Lane, which was called Commercial Park Drive in the late 1980s,” he explained.

“As we grew Regal rapidly in the 1990s, we were fortunate enough to rent additional space on Commercial Park Drive. Over the years we gradually acquired all of the property and the street was renamed Regal Lane,” he told The Focus.

“We have chosen to remain in the Knoxville area (Halls) for numerous reasons, including quality of life, family-friendly environment, scenic surroundings, and the cost of living. We are a nationwide company and with online connection to all our facilities across the nation, we can manage it from any place in the country. We like being in Knoxville and have no plans to relocate,” he said.

One of the vital community groups in the neighborhood is the Halls Crossroads Women’s League which contributes to local functions, schools, and recognizes outstanding citizens in the community. They award an annual scholarship, operate “The Closet” to supply school supplies and clothing to families in need, sponsor the Outdoor Classroom,” promote litter pickup, fund the writing of a Halls History, and are currently working toward a Halls Museum.

Mariblair Smith is the current president.

“We give two scholarships each year to Halls High School girls,” Mrs. Smith said. She noted that the League helped to clean up and kept up the old Tom Halls Cemetery on Rifle Range Road and is working with Hubert Larue to find a place for the museum.

Smith added that the Women’s League also visits the Hospice once a month and that The Closet is open every Monday and Thursday from 3 until 6 p.m.

“We are working with the Business and Professional Association to present awards to businesses and individuals for beautification and we’re talking with the Hallsdale-Powell Utility District and the Halls High School to get the school pressure washed sometime this spring,” she said.

R. Larry Smith, 30-year Halls Crossroads resident and County Commissioner for the community, said, “Halls is still a close knit community.”  He said Halls needs a “large box store” and urged Halls residents to volunteer and help keep the streets clean.  Smith said that Emory Road is getting five lanes to link it to I-75 and that five lanes are being planned from Halls to Maynardville.

“The northern part of Halls is busting out commercially. There’s a Kroger store planned for the old Powell Airport,” he told The Focus. “You can get more for your buck in north Knoxville and (Halls) has the infrastructure in place.”