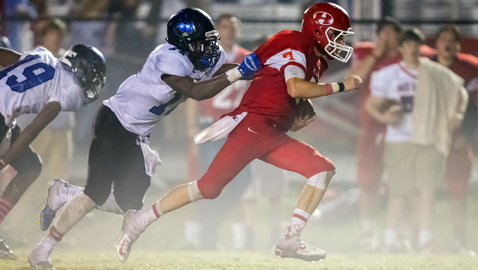 PHOTO BY TIM GANGLOFF / hatpix.com
Halls’ Colby Jones runs the ball through the fog Friday night, while Karns’ Stedman Love tries to tackle him in the District 3-AAA game. The host Red Devils finished strong to get past Mother Nature and the Beavers 47-35.

Karns and Halls were victory starved. The two teams had combined for only one win this season.

As it turned out, coaches from each team knew it was going to take four quarters of good football to get in the win column. Halls came the closest.

The Red Devils overcame a fast start by visiting Karns and notched a 47-35 homecoming victory Friday night in a competitive District 3-AAA game that lasted 3 hours and 2 minutes and had to deal with a downpour of rain and a little fog.

But Mother Nature didn’t spoil this night in the Red Nation.

“We’re real proud of their effort and how they finished the game,” said Halls Coach J.D. Overton. “We got down early but proud of how they bounced back and fought to the finish.

“We had that problem earlier in the season – playing a real good first half but not finishing and putting a complete ball game together. We did that tonight and that’s what we’ve really been stressing.”

Karns, with its uptempo attack clicking, jumped out to a 21-7 lead in the first period. But Halls caught up before halftime, then outscored the Beavers 13-0 in third quarter and withstood Karns’ late charge.

Tobi Kilgore said a difference-making play in the game came on the first play of the second half when Moni Munsey’s 68-yard touchdown run was nullified by a holding penalty.

“We shoot ourselves in the foot, and right now our mentality is, ‘Here we go again,” said Kilgore. “We’ve just got to figure out, when adversity hits, how to overcome it, and put four quarters together. Until then, we’re not going to win a football game.

“Hats off to Halls,” added Kilgore. “We’ve still got a long way to go.”

Quarterback Greg Tye scored on a misdirection keeper from 16 yards out and Sam Frazier’s PAT kick gave Karns the early lead. Will Smith slipped out of a tackle and raced 42 yards to score his first of two TDs in the opening quarter and put the Beavers up 14-0.

Halls temporarily interrupted Karns’ fun when Colby Jones, lined up in the Wildcat, passed to JT Freels in the flat and he ran down the sideline for a 72-yard score. Mark Chargulaff’s extra-point kick cut Karns’ lead to 14-7.

The Beavers didn’t waste anytime restoring their 14-point lead as Stedman Love ran 47 yards around right end to set up a 5-yard TD run by Smith.

A 15-yard pass interference foul against Karns led to Halls’ second score – an 8-yard run by Jones on the first play of the second quarter.

After a Karns punt, Halls’ passing game took over, netting 69 yards on four completions. Despite a heavy rain starting to fall, QB Andrew Davis scored on 4th-and-1 from just outside the 1-yardline. The PAT kick failed, leaving the Red Devils down 21-20.

With its offense spread out, Tye carried the ball up the middle for a 15-yard touchdown play to put the Beavers up 28-20.

A 15-yard roughing the passer foul aided Halls’ next possession and the Red Devils pulled into a tie on Jones’ 6-yard touchdown run and his 2-point pass to Matthew Runge-Gold.

After its TD was called back, Karns’ opening possession after halftime was stopped by freshman Cooper Cook’s interception at the Beavers’ 39. Davis’ 37-yard pass to Runge-Gold three plays later gave Halls its first lead, 35-28.

Defensive adjustments at halftime helped Halls hold Karns to one touchdown in the second half, said Coach Overton. On Karns’ next possession, a 4th-and-2 play at the Halls 46 came up a yard short when Hutson Woods and Hunter Huff tackled Tye.

A pass interference foul by Karns gave Halls a first down at the Beavers’ 29. On 4th-and-12, Davis hooked up with Jones for a 31-yard pass play to give Halls a 41-28 advantage.

Midway through the final quarter, Tye’s 29-yard pass to Travis Blair got Karns out of a hole. Then Roberto Veljkovic, getting a block down field from Damon Billingsley, took a pass from Tye 50 yards to the end zone, pulling the Beavers within six points (41-35) with 5:15 left in the game.

Jones’ interception and return to the Karns 1 sealed the victory.