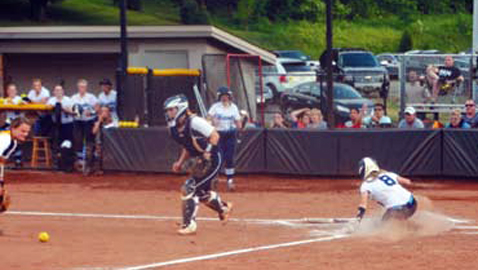 PHOTO BY DAN ANDREWS
Hardin Valley Academy shortstop Leslie Beecham slides past Seymour’s Reid Ballard and into home with the Lady Hawks’ first run against the Lady Eagles in a Section 1-AAA game at HVA Friday night. The Lady Hawks prevailed 8-3 and punched their ticket to this week’s State Tournament.

A long voyage for the Hardin Valley Academy softball team resulted in a trip to Murfreesboro. The Lady Hawks punched their ticket to the Class AAA State Tournament with an 8-3 victory at home Friday night.

HVA will make its first trip to the Midstate this week but two key figures have played on the big stage before.

Junior pitcher Kaleigh Wynne won an Arkansas State Championship as a freshman at North Little Rock High School. She moved to East Tennessee before her sophomore season and she’s found a home with the Lady Hawks.

“I played in the State Tournament as a senior and I really wanted these kids to experience this,” Hickam-Cruze said.

“These upper classmen have worked really hard and I have freshmen who have stepped up and made plays.

“We’re going to have fun this week.”

Hardin Valley’s run to the State Tournament began when the Lady Hawks won the District Tournament as the fifth seed. HVA (29-12) had to beat Maryville twice to reach the tourney title game. There, the Lady Hawks beat rival Bearden to claim their first-ever district championship.

That victory netted a Region 2-AAA semifinal home game against Halls. HVA came up with a dramatic 2-1 win over the Lady Devils. That win set up another showdown with Lady Bulldogs where Hardin Valley outlasted Bearden 4-3 in another dramatic comeback win.

The Section 1-AAA tilt against the Lady Eagles, which was delayed nearly two hours due to rain, proved to be a bit less dramatic.

Hardin Valley used a six-run second inning to eliminate Seymour. In that frame, The Lady Hawks sent nine hitters to the plate and pounded out six hits and took advantage of some shaky Seymour defense.

Hardin Valley took a 1-0 lead when Aubry McGuire’s single plated Leslie Beecham with the game’s first run. Beecham reached on a fielder’s choice and advanced to third when freshman designated player Jodie Parham doubled. McGuire then singled and advanced to second on a Seymour error. Parham took third on the play before Sydney Dukes walked to load the bases before Wynne delivered a bases-clearing double past Lady Eagles’ third baseman Bailey Pierce and down the left-field line.

Opponents have pitched around Wynne throughout the postseason, but the walk to Dukes left Seymour pitcher Sam Trentham no choice but to pitch to one of Knox County’s best athletes and most feared hitters. Chelsey Texeira and Mikaela Chavis added RBI doubles before the inning finally came to an end.

Hardin Valley then took an 8-0 lead in the bottom of the fifth when Parham delivered a two-out two run single.

Wynne kept the Lady Eagles at bay until the sixth inning despite not having her best stuff.

“I just didn’t perform like I wanted to,” said Wynne, who was emotional after the victory. “My stuff wasn’t working and I’m just glad that the other girls had my back.”

The Lady Eagles got on the board in the sixth when a sacrifice fly by Lauren Acker scored Trentham, who reached on an infield single.

Seymour added a pair of runs in the seventh but it was a case of too little, too late for the Lady Eagles, who closed their season with two consecutive losses.

In the region tournament, Wynne scored the winning run against both Halls and Bearden after being intentionally walked.

Chavis had the game-winning hit against the Lady Bulldogs, who also advanced to this week with a win over Jefferson County Friday afternoon.

Texeira got the winning hit against Halls on Monday, May 11.