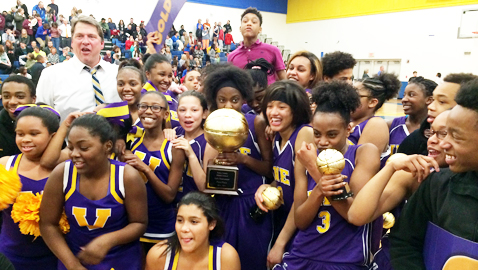 David Haskell hadn’t planned on coaching basketball this season. He would be teaching health and physical education for the second year at Vine Middle Magnet Academy.

Haskell’s son, Connor, would be coming to Vine with him for his eighth grade year and first in public schools after having been home schooled.

As for basketball at Vine, Haskell had just planned on watching Connor play on the boys’ team.

Haskell had been assistant boys coach to Jody Wright at Fulton High for 13 years (1989 through 2002) and after that he was the Whittle Springs Middle School boys head coach for a couple of seasons. He even coached the boys and girls teams at Whittle Springs one season. But he had been out of coaching for quite a while, helping his wife, Lisa, raise a young family.

Haskell’s Lady Golden Bears went on to capture the Knox County Middle School tournament championship with a 38-36 win over West Valley in the finals on Feb. 5.

“To see the smiles on those girls’ faces and to see them achieve something like that and that they haven’t achieved before is huge,” said Haskell, looking back on the season that included 20 wins and only one loss.

Coaching also helped Haskell get through a tough time in his life earlier this winter as his mom died unexpectedly on Dec. 17.

Joan Haskell, 79, passed away while on a cruise with David’s younger sister.

“With it happening right in the middle of basketball season, it was kind of hard to stay focused. But in a way, it (coaching) was therapeutic, too. It kind of kept me busy.

“Really touching for me,” added Haskell, “(was that) all the Vine parents were so supportive. I was very touched by all their condolences and sentiments they sent.

“Everybody, including the girls, was really sweet and I was blessed by that.”

Looking back on the low-scoring title game, Haskell said Radashia Bailey making three 3-point shots was a key factor in the win, particularly since West Valley’s 1-2-2 zone was packed in to take away Vine’s inside attack.

Bailey, a seventh grader, had started in place of injured Camiah Wilson.

Haskell also pointed out West Valley took a 15-7 lead in the second period after defensive standout Thomajah Bishop went out of the game with her second foul. Bishop was put back in at the 3-minute mark before halftime and that’s when Vine went on a run.

MVP Larriana Bullard was all over the court for the champs. Just when it looked like she might be tiring, she got her second wind.

“It almost looked to me like our girls just willed themselves to refuse to lose,” said Haskell.

“We beat them in the regular season at our place in a game that was closer than the score. It’s so hard to beat a good team twice and Josh Ballard is probably the best girls coach in Knox County. I think he does a great job. He’s a young guy, really knowledgeable about the game and fundamentally his girls are so sound.”

Vine’s lone setback, a 14-point loss at Farragut early in the season, motivated the Lady Bears, noted Haskell, who said he also has “a lot of respect” for Susan Davidson, Farragut’s coach.

It’s uncertain if the Vine girls have won a county championship prior to this season.

“The only girls banner in the gym is a runner-up banner from 1998,” said Haskell. “I don’t know if they’ve ever won a title before this year, to be honest.”