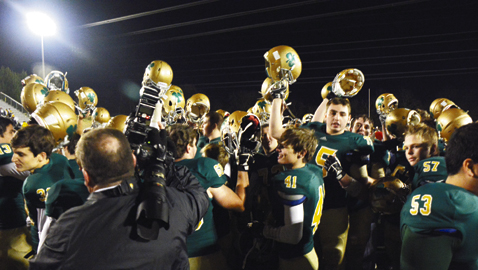 Catholic scored on its first six possessions en route to a 55-14 victory over DeKalb County at Blaine Stadium.

In fact the only thing that stopped the Irish’s balanced offense in the first half was the clock, which ran out on their final possession.

Catholic, which was riddled with injuries late in the regular season, lost its final two road games before coming home to dismantle the Tigers.

“We’re starting to get back to being healthy,” Catholic first-year head coach Steve Matthews said. “We were missing our quarterback and he came back tonight and I thought he did a great job.”

Catholic (8-3) took the opening kickoff and marched 58 yards on eight plays for the game’s first touchdown. Junior running back Logan Lacey capped the drive with a 2-yard touchdown run. Wyatt Price added the extra point to give the Irish a 7-0 lead with 9 minutes, 24 seconds remaining in the opening quarter.

And that was just the beginning as Catholic scored 21 first-quarter points. Lacey scored his second TD on a 7-yard reception with seven minutes to go.

“I’m just glad that we came out and played hard,” said Lacey, who rushed for two touchdowns, caught another and threw a scoring strike to Will Martinez. “We got our physicalness back.

“From here, it just gets tougher.”

Elijah Brown extended Catholic’s advantage to 21-0 with a 22-yard run late in the frame. Brown’s second scoring run came at the 10:17 mark of the second quarter and made it 28-0.

Lacey, who also had five receptions for 95 yards before halftime, scored on a 20-yard scamper to make the score 34-0 just over three minutes into the second stanza. His scoring strike to Martinez made it 41-0 midway through the frame.

Erik Profetto scored the Irish’s final touchdown before the break on a 13-yard dash with 3:53 left in the first half.

Catholic’s defense added the exclamation point when Haydn Tanner scored on a 23-yard fumble return in the third quarter.

The Tigers scored their first touchdown on a 43-yard run by Divonta Milan. DeKalb County’s other score was a touchdown pass from freshman quarterback Steven Jennings to Lance Ball.

Catholic will play at Signal Mountain Friday night. Signal Hill, the top-seeded team in the quadrant, routed Marshall County 52-17 in the first round.