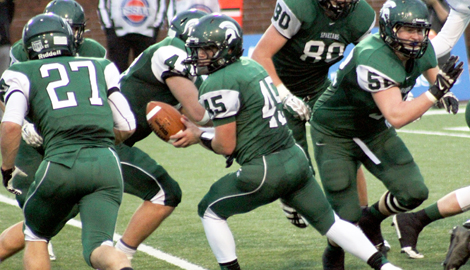 Defense and special teams… The Webb Spartans sure are glad both units brought their best game at the best time.

On Thursday, December 4, the Spartans beat Battle Ground Academy 38-21 in the Division II-A  Championship Game in Cookeville.  It is the third straight state championship for Webb School of Knoxville.

“Seeing these kids reach their goal, they worked so hard,” said Webb Spartans head coach Meske after the game to a statewide television audience.  “It makes your heart warm and I am just so proud of them.”

The Spartans (10-3) got off to a shaky start when quarterback Brock Beeler threw an interception on the first play from scrimmage.   But the defense had their back, forcing a BGA fumble two plays later.

After a missed field goal from Webb, BGA quarterback Clayton Beathard hit Ronald Cleveland on a 65 yard gain. Zach Hardiman ran it in from 10 yards out on the next play, and BGA (10-3) had a 7-0 lead with 6:53 to go in the first quarter.

The Spartans responded with an impressive 11 play 66 yard drive that took over six minutes off the game clock.  Mr. Football Award Winner Brant Mitchell scored on a 10 yard run, and the game was tied at 7.

The second quarter was all Webb School.

First the Spartans defense forced a three and out from the Wildcats offense.  Wrinn Alexander blocked a punt, picked up the football, and run 15 yards for the score, and with 11:44 to go in the second quarter, Webb went on top 14-7.

On the ensuing kickoff Webb School got a break when BGA’s Rieves Berry fumbled and Spartans’ Andrew Craig recovered at the Wildcats 11 yard line.  The referees missed an obvious facemask call that would have nullified the turnover.

Webb turned the fumble into points when Andrew Favaro kicked a 27 yard field goal, and with 9:44 to go in the first half, the Spartans had a 17-7 advantage.

Things went from bad to worse on the next BGA possession with Beathard was picked off by Mitchell, who ran it back 55 yards for a touchdown.  It was now 24-7 midway through the second quarter.

On their next possession the Webb kept the good times rolling with an 8 play 56 yard drive that took more than 4 minutes off the game clock.  Alexander Berube took the handoff around the far side and 13 yards later was in the end zone.

At intermission Webb School was in control 31-7.

BGA got some momentum back when Cleveland took the opening kickoff all the way back to the Webb 7 yard line.  Four plays later Beathard snuck the football over the goal-line, and the Wildcats were down 31-14 with 9:51 to go in the third quarter.

A 13 yard pass from Beathard to Marcus Cawthorne got those points back for BGA, and with 4:17 to go in the third they trailed 38-21.  There was still plenty of time left for them to make a comeback.

But the Webb offense moved the football enough to work the clock, and the Webb defense forced the Wildcats to turn the football over on downs twice.  Scoring

“BGA did a great job they didn’t quit anytime on the field,” said Meske. “In the second half they got back in this game and they played hard. We had to play hard.  I’m proud of the way we reacted to them playing hard, so we did a great job.”

On the day the Spartans forced four turnovers.  Brant Mitchell, who will play his college football at Georgia Tech, was named both the Offensive and Defensive MVP.  He ran for 111 yards and a touchdown, made five tackles and made two interceptions, one that also resulted in a touchdown.