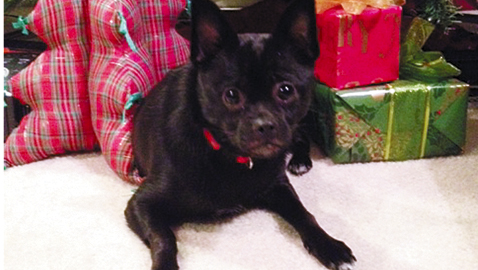 Santa is trying to find Nike a “loving permanent family.”

I guess it was one day last spring when I walked into The Knoxville Focus office and saw this cute little black puppy.

At first, I thought she belonged to Rose King, who is in charge of our office and classifieds and a hundred and one other things at The Focus, but I soon found out Nike was a recent addition to the King household, rescued by Rose son Matthew, then a junior at Powell High School.

What an adorable puppy, I thought, and what a sporty name, taken right from the sports footwear and apparel giant.

From time to time, I have asked about Nike. She’s fine, Rose has told me, except she keeps “leaving these little surprises,” every now and then. Rose figured Nike would outgrow that, particularly after finding out the puppy was probably even younger than she was first thought to be.

Last Monday morning, however, when I was in the office, Rose told Bill Wright, a member of our sales staff, and I that her family was going to have to give up Nike and take her to Young-Williams Animal Shelter for adoption. I could tell it was painful for Rose to even say those words.

It’s not that Nike isn’t house-trained. It’s because the family is so busy with work and school. Both mom and dad have full-time jobs, and with Matthew being accepted to East Tennessee State University, soon all three of the family’s children will be in college. There’s just no one at home that much”   to give Nike the training and attention a puppy needs

I’d love to have Nike, but I have five cats, and I doubt Allie, Gracie, Pistol, Polly and Graham Cracker would think that’s such a warm and fuzzy idea.

So, I had this idea, Santa. I told Rose I was going to be writing you a letter, and maybe you might be able to help find Nike a new home, one with younger children to play with and be loved by, and one where she could be let outside a little more often.

I think she still believes in you, too.

So, here’s a little more info on Nike, and how she came into the lives of Matthew and the King family.

Nike is a Pomeranian-Jack Russell mix and about 7-8 months old. All of her shots are up to date. She weighs around 8 pounds, and probably won’t get much bigger.

“Matthew and his friend, Cody, had just begun summer break between their junior and senior year,” said Rose, recalling the day Nike was rescued. “They were going into Walmart to buy worms for a day of fishing. On their way in they came upon a box of puppies. They were told that the puppies would be going to the pound the next day. The boys brought the pair of sisters home with them.

“Matthew had just taken a Greek Mythology class, and learned that the name of his favorite brand shoe is also the name of the goddess of victory. Because she was cute and victorious in her escape from a trip to the pound, and because we let him bring her home, Matt named her Nike.”

“Nike plays well with our Boston Terrier, Sammie, obeys simple commands such as ‘sit’, ‘come’, ‘drop it’ and is getting better every day at ‘no jumping’. She is energetic and playful, but has not been destructive. She has several chew toys to play with and loves to sit in a lap. She is well on her way, but not quite fully housebroken yet.”

“Bottom line: Nike needs a family who can give her play time and attention,” said Rose.

“Nike will be missed in our home. We have enjoyed being her foster family, but now it is time for Nike to be adopted by a loving permanent family.

“I am sure that Santa already knows a nice family who needs just such a playmate.”

See Santa. I told you Rose believes in you. Her family will be so happy if you can find little Nike a good home. How about the North Pole?

Santa, in memory of the late Russ Bebb, a co-worker of mine who wrote to you in the sports pages of The Knoxville Journal for many years, here are my other Christmas wishes and gift ideas for a few in the world of sports:

Give Peyton Manning the last laugh for winning the first outdoor, cold-weather Super Bowl on Feb. 2 in East Rutherford, N.J.

Give Eli a pass that’s not intercepted.

Take back “Archie Who?” buttons. Peyton and Eli’s dad was a great quarterback. We’ve learned over the years, he’s a great guy, too.

Give Cuonzo Martin a technical and see if that fires up the team.

Give our basketball Vols the green light to run and press and wear out opponents with a two-platoon system.

Give UT fans home-and-away games against Kentucky each year.

Give our Lady Vols a schedule that annually includes the Lady Huskies.

Give Fulton Falcons a new football scoreboard. They wore out the old one.

Give Johnny Majors and Phillip Fulmer our thanks for the memories.

Give Steve Spurrier a DVD of the Vols’ 23-21 win over the Gamecocks and let Michael Palardy make the presentation.

Give Dave Hart another opportunity to chest bump Butch.

Give Pat Summitt a lifetime pass to any game, anywhere, anytime.

Give Nick Saban the Texas job, Lane Kiffin the Alabama job and UT fans restraint when the Tide and Lane Train rolls into Neyland Stadium next season.

Finally, Santa, my greatest wish is for every girl to find a doll and every boy a ball under the tree on Christmas morning.

Thanks, Santa. Have a safe trip and give my best to Mrs. Claus.

Merry Christmas and Happy New Year to all!