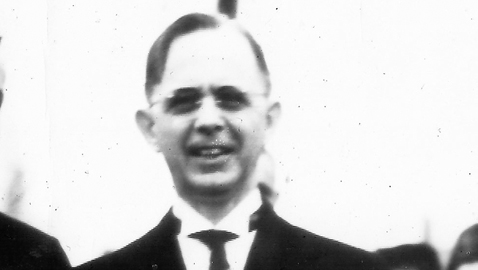 Hill McAlister was governor of Tennessee during one of the most difficult times in our state’s history; McAlister was chief executive of the Volunteer State during the Great Depression.

Born July 15, 1875, McAlister was the son of a local judge and attorney and enjoyed a reasonably comfortable upbringing.  He attended Vanderbilt University, where he earned a law degree and was practicing law by the time he was twenty.  By the time he was twenty-two, McAlister had found a comfortable position as assistant to the City Attorney of Nashville.  At twenty-six, Hill McAlister was named Attorney for the City of Nashville in 1905.

McAlister was elected to the Tennessee State Senate in 1910, where he served for two terms.  Increasingly, McAlister was active in Democratic politics and was an elector for President Woodrow Wilson’s reelection bid in 1916, as well as a member of Tennessee’s Democratic Party Executive Committee.

Hill McAlister’s service in the Tennessee General Assembly helped him to be elected State Treasurer, a position within the gift of the members of the legislature.  McAlister was State Treasurer from 1919 – 1927.

Tennessee Democrats had to endure a Republican governor, Alf Taylor, for a brief two years.  Taylor was defeated for reelection in 1922 by attorney and farmer Austin Peay, who set out to completely reform Tennessee government.  McAlister and Peay soon found themselves at odd and during much of the decade of the 1920s, Hill McAlister was issuing regular warnings about a coming financial crisis in Tennessee.  By and large the 1920s was a time of prosperity throughout most of the United States, so few people took McAlister’s warnings seriously.

Governor Peay had soon incurred the wrath of the big city machines in Shelby and Davidson Counties.  E. H. Crump, leader of the Shelby County machine, joined with Nashville Mayor Hillary Howse, who was the leader of a smoothly functioning machine in Davidson County.  The two political bosses were unhappy with Governor Peay who was paying for many improvements through taxing the urban areas to benefit the more rural areas of the state.

McAlister, already a vocal opponent of Austin Peay, became the candidate of the urban areas when he challenged Peay in the 1926 Democratic primary.  It was a hard fought battle and McAlister carried Davidson and Shelby Counties by handsome majorities, although he lost Hamilton and Knox Counties to Governor Peay.  Ultimately, Peay prevailed by around 8,000 votes.

Unfortunately, Austin Peay was not destined to live out his term, dying of a cerebral hemorrhage in October of 1925.  Lieutenant Governor Henry Horton succeeded Peay and the inexperienced chief executive seemed content to allow former U. S. Senator Luke Lea run state government, a fact which especially appalled E. H. Crump.  Lea was already influential, owning and publishing newspapers in Tennessee, including the Nashville Tennessean.

Once again, Crump backed Hill McAlister to run for governor in the 1928 primary.  Lea, a wily politician, sought to cripple Crump and his allies by nudging Congressman Finis Garrett into the senatorial campaign against incumbent Kenneth McKellar.  Lea, who had been defeated by McKellar in 1916, realized the Memphis Boss would have to divide his resources if Senator McKellar had a serious opponent.  McKellar, who was also strongly for Hill McAlister, would be kept occupied with his own race instead of meddling in the governor’s race with an opponent.

Yet again McAlister ran a strong, but losing campaign.  Horton tried to carry the banner of the late Governor Austin Peay in the primary, but was profoundly embarrassed when the late governor’s widow endorsed the candidacy of Lewis Pope, who had served in the Cabinet of Austin Peay.  Pope was not much of a factor during the election, which Horton won by little more than 5,000 votes.  McAlister again carried Davidson and Shelby Counties with large majorities; he also won Knox County, but lost Hamilton County to Horton.

Luke Lea and E. H. Crump came to an understanding and an uneasy truce commenced, allowing Henry Horton to run for governor again in 1930 and win convincingly over L. E. Gwinn.  Days after the 1930 election the impending financial crisis Hill McAlister had forewarned Tennesseans about for almost a decade hit and hit hard.  Banks failed, almost $7,000,000 in state money was lost and Governor Horton was quite nearly impeached.  The legislature had restored Hill McAlister as State Treasurer and he entered the 1932 campaign, his third gubernatorial bid, as the favorite.

The administration of Henry Horton was shattered and the governor was politically impotent for much of his last term.  Luke Lea desperately attempted to keep control over the governor’s office, although the best he could do in the way of a candidate was former Governor Malcolm Rice Patterson.  A former Congressman and governor, Patterson had discredited himself in a series of events which culminated with the murder of Senator Edward Ward Carmack.  Patterson had also been discovered drunk in a Nashville brothel.  Despite proclaiming his hatred for demon rum and enjoying something of a small revival as a lecturer on behalf of prohibition, Patterson was not a strong candidate.  Lewis Pope, a former official in the administration of Governor Austin Peay emerged as the strongest candidate to face Hill McAlister.

McAlister won the Democratic nomination by less than 10,000 votes, but Pope refused to accept the verdict of the primary election, claiming he had been cheated out of the nomination.  Pope declared he would bolt the Democratic Party and seek election in the general election as an Independent.

Senator K. D. McKellar and Ed Crump, both of whom had strongly backed McAlister, quickly moved to coalesce support for the entire Democratic ticket.  McAlister was paired with the presidential campaign of Governor Franklin Delano Roosevelt, the Democratic candidate for president.  The Republican incumbent, Herbert Hoover, had actually carried Tennessee in 1928, but was as unpopular in the Volunteer State as he was throughout much of the rest of the country due to the hardships brought on by the Great Depression and his inability to bring about some relief.

Lewis Pope ran hard during the general election, using Crump and his political organization as a whipping post, claiming he was the legitimate nominee of the Democratic Party.  Despite Pope’s claims, he lost decisively to Hill McAlister on Election Day.  Lewis Pope actually ran third, several thousand votes behind the Republican nominee.

Governor McAlister was immediately faced with a variety of problems, not the least of which was the state debt and the money lost during the Horton administration.  Having been State Treasurer, McAlister was thoroughly familiar with the budget and immediately began reducing expenditures.  McAlister drew a red line through more than 2,000 state jobs, reduced spending by almost exactly the amount lost by the Horton administration, and even cut support for the governor’s own mansion.

Times were quite bleak in Tennessee during the Depression and McAlister worked closely with his friend Senator K. D. McKellar to get as much relief as possible.  Yet, Governor McAlister got little or no credit for his accomplishments from a still smoldering Lewis Pope.  Pope was determined to be a candidate for governor again in 1934 and entered the Democratic primary, despite having run as an Independent two years earlier.

Governor McAlister won the nomination by almost 50,000 votes.  Pope, true to form, claimed he had been defrauded yet again and formed a coalition ticket with former Governor Ben W. Hooper, a Republican who was running for the U. S. Senate against Kenneth McKellar.

McKellar campaigned almost leisurely throughout the state, along with Governor McAlister and Nathan L. Bachman, who was running in a special election for Tennessee’s other seat in the United States Senate.  Posters featuring the entire Democratic ticket and President Franklin D. Roosevelt (who was not running for anything at the time) were plastered all across the state.  Pope and Hooper lost badly.

Governor McAlister desperately needed more money to keep the state government afloat and he announced his support for a sales tax.  E. H. Crump, a bitter opponent of such a tax, was outraged.  The Shelby County legislative delegation, under orders from Crump, helped to defeat the measure in the Tennessee General Assembly.  McAlister wanted to run again in 1936 for a third two-year term and while Senator McKellar tried to cajole Crump into supporting the governor yet again, the Memphis Boss refused to budge.  Snapping that McAlister was “Tennessee’s sorriest governor”, Crump backed former Congressman Gordon Browning instead.

McAlister decided not to run and like many other Tennesseans, found himself in need of employment.  He turned to Senator McKellar who found him a job as legal counsel to the Bituminous Coal Commission, which paid a handsome salary.  Some newspapers in Tennessee criticized the appointment, which bothered McKellar not at all.  Tennessee’s other U. S. senator, George L. Berry, noted that McAlister needed a job and declared himself not to be the sort to put a man out of work.

Again with McKellar’s help, Hill McAlister became the bankruptcy referee for the federal court in Nashville in 1940.  The former governor retained that position for the rest of his life.  McAlister, never recovering from the political trauma of having suggested Tennessee implement a sales tax, was never again a factor in state politics.  He lived in an impressive mansion on Nashville’s West End with his wife Louise, who was the daughter of Tennessee Senator Howell Jackson, who was later a Justice of the United States Supreme Court.

Governor McAlister passed away quietly on October 30, 1959 at age eighty-four.