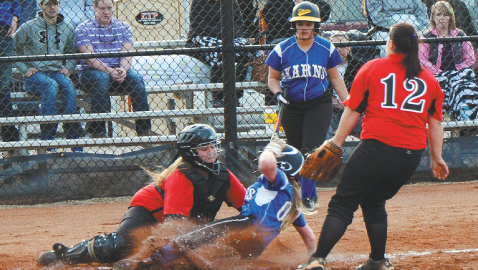 Photo by Dan Andrews.
Karns High’s Alyssa Turner slides home past the tag of Central catcher Maleah Hipsher in a district game last week at Karns while Central pitcher Dakota Sise (12) rushes to back up a play. The Lady Bobcats prevailed 8-5 over the Lady Beavers to improve to 4-1 on the season.

By Ken Lay
Senior catcher Maleah Hipsher knows that she’ll be expected to provide some offensive punch for the Central High School softball team and this a role she relishes.
Hipsher, the fifth hitter in the Lady Bobcats’ batting order, came through big on Monday, March 24 in an 8-5 District 3-AAA victory at Karns.
Her grand slam home run in the top of the first inning gave Central a 4-0 lead and set the tone for a key early-season district road win over the Lady Beavers.
Hipsher parked a low pitch over the fence after Courtney Styles drew a one-out walk to load the bases.
She knows that most opposing coaches will pitch around Styles, a power threat in Central’s lineup for the last four seasons.
“I love low pitches and I know that they’re usually going to pitcher around Courtney so I have to drive in runs for her,” Hipsher said. “I learned early that they were going to pitch around her.”
Leah Dailey, Central’s first-year coach said that she feels confident that Hipsher can get the job done when called upon.
“That’s why she’s in that fifth spot,” Dailey said of her senior catcher.
As it turned out, Hipsher wasn’t the only Lady Bobcat to come through on this night. Central used a pair of big innings to outlast the young Lady Beavers (2-6 overall, 1-2 in the district).
Central (4-1, 1-1) scored another run in the top of the fifth Megan Whaley singled home Styles who opened the frame by reaching on a two-base error.
Karns might have faced an early deficit but the Lady Beavers did anything but go quietly.
Trailing 4-0 in the bottom of the first, the Lady Beavers scored a run in the frame on an RBI double by Sarah Gordon that plated Miyah Beeler, who led off the inning with a bunt single.
Karns added two runs in the fifth to pull within 5-3. Alyssa Turner led off the inning with a double and took third on a single by freshman pitcher Nicole Wilcox. Turner scored on a wild pitch and Malin Nocera’s sacrifice fly made the score 5-3.
Karns evened things in the sixth on a two-run double by Hanna Chapman.
“That Karns team showed a lot of heart,” Dailey said.
Central scored three runs in the top of the seventh. Styles had a leadoff solo homer. Caitlyn Rolen had an RBI single and Bailee Compton drove in a run when she reached on an error.
The Lady Beavers mounted a threat with a pair of hits in the bottom of the frame but Central pitcher Dakota Sise ended the game by inducing a popup by Turner.
Even in defeat, Karns coach Brittany Dunsmore applauded her team’s effort.
“They showed a lot of heart battling back,” she said. “We’ve got a young team. We don’t have any seniors.
“We just have to keep fighting and eventually things will turn around and go our way.”