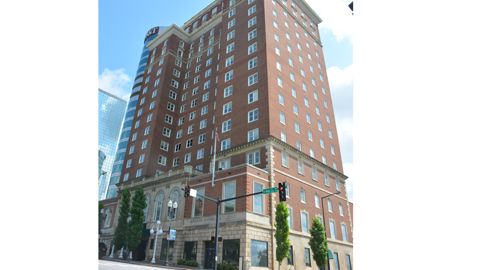 Photo by Dan Andrews.
The Andrew Johnson Building in downtown Knoxville was built as an upscale hotel almost 100 years ago.

In about 12 years the Andrew Johnson Building on the corner of Gay and West Hill Street will be 100 years old. Over those many years the building, now on the National Register of Historic Places, has seen tenants come and go. Some were famous and some were infamous.

Finding a buyer for the 18-story structure  should not be difficult and many firms have inquired about buying it.

Built about 1927 and named for President Andrew Johnson, a Greeneville resident who began his professional life as a tailor  The Andrew Johnson Building was once Knoxville’s finest hotel and the tallest building in the city. The building hosted folks like Emelia Earhart, Duke Ellington, Jean-Paul Sarte and even Elvis Presley. The hotel hosted Hank Williams in the last night of the Country Icon’s life.

Currently the school offices occupy fourteen of the eighteen floors and there’s a two-story penthouse topping the building. Many organizations within the state got their beginnings there during meeting and planning sessions including the TVA and the Great Smoky Mountain State Park.

For years WNOX broadcast the Midday Merry-Go Round from the hotel and it proved so popular and drew such a crowd that the hotel asked the radio program to find another location after noise complaints from paying guests. Performers like Homer and Jethro and Roy Acuff were featured on the show.

R.J. Reynolds bought the building in 1941 and in 1991 Knox County paid for the building to the tune of $2.5 million. Today the estimated value is more than $12 million.

“It’s a historic old building,” Mayor Tim Burchett told The Focus. He said the “real cool” structure would be ideal for retail on the first floor, apartments upstairs and said the penthouse atop the building would sell for $ 1 million.

“Government is a poor steward of property and money,” he said.

Burchett said he’d like to see the building vacated and sold “before I go out of office” in three years.