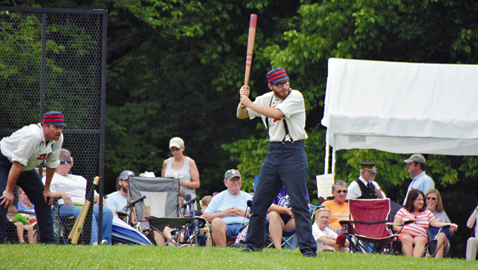 The Knoxville Holstons have taken the National Pastime back to its roots.

The Holstons, who play in the Tennessee Vintage Baseball Association, play their home games at the Historic Ramsey House. It’s Knoxville’s first season in the league that was founded in Nashville in 2013 and plays its games according to 1864 baseball rules.

The uniforms are Vintage and Knoxville’s team forges baseball and American History.

“Families come out and the ladies wear their best Sunday dresses and some of the men come in military uniforms,” said Holstons’ captain Adam “Butter  Bean” Alfrey. “We do our best to make it a family friendly.”

Baseball is only part of the experience at a vintage baseball game. A live three-piece band entertains the fans between innings.

“We use baseball to bring history alive and between the lines, it’s 1864,” Alfrey said.

“I am a baseball fan but I’m a removed fan. I never played,” he said. “But some of my fondest memories are of lying on shag carpeting and watching the Braves play with my grandfather.

“I always liked baseball at the local level and I always enjoyed going to the Smokies’ games whether they were where they are now and when they were in Knoxville.”

Like modern-day baseball, the vintage game is competitive but these players make a point to have fun when they play on weekends.

The league, which is entertaining the idea of expansion next season, is open to players of all ages and skill levels.

“We have a good mix,” Alfrey said. “You have guys like me, who never played organized ball and we have some guys who have played college ball.

“We have a kid on our team who is 20 years old and the Phoenix [of East Nashville] team has a player who is 64. Anyone who wants to get involved can play and there’s an interest page on the [league’s] website and we’ll field teams in the order that the people signed up. I would encourage people to sign the interest page early [for next season]. Right now, we’re in the middle of the season but the league is looking to expand and be more balanced. There are six teams in Middle Tennessee and we’re hoping to have six teams in East Tennessee.”

“We have an arbiter and basically his job is to call fair or foul,” Alfrey said. “If you’re called safe when you get to the sack [base] and you know that you’re out. Then, you give a handshake and tell [the fielder] that he bested you and you go back to the bench.”

The arbiter also explains the rules of the game and also attempts to keep the fans involved in the game.

At press time the Holstons, who lost to the Dry Town Boys of Roane County 14-7, were 2-4. Roane County won the game with a seven-run eighth inning that broke a 7-7 tie before an estimated crowd of 400 fans at the Historic Ramsey House.

Knoxville’s next home game will be against the Dry Town Boys on July 26 at noon.

The Holstons and Roane County will co-host a double header at World’s Fair Park on Aug. 16. The Dry Town Boys will play the Franklin Farriers at noon. The Holstons will then entertain the Nashville Maroons at 2:30 p.m.