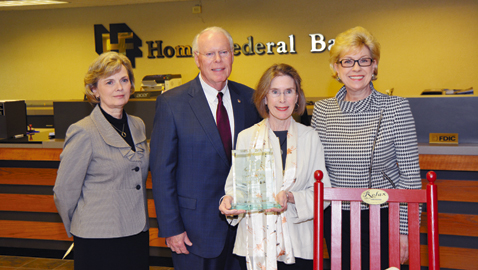 Photo by Dan Andrews.
Home Federal Bank Executive Vice President Debra Smith (from left) and President Dale Keasling name Carol Devenski a 2013 Hometown Hero at a ceremony at the bank’s Bearden branch April 22. Devenski designated her $2,500 award to the Knoxville Museum of Art, and KMA Director of Development Susan Hyde accepted the funds on behalf of the organization.

Home Federal Bank recognized four outstanding community leaders last week as part of its Hometown Heroes tradition. Now in its third year, the Hometown Heroes program spotlights ordinary people who do extraordinary things for others and their community. The public submitted dozens of nominations and ten winners were selected for their extraordinary volunteer work.

Home Federal Bank named Carol Devenski a 2013 Hometown Hero and presented a check for $2,500 in her name to the Knoxville Museum of Art at a ceremony at the Home Federal Bank Bearden branch on Monday, April 22.

A volunteer docent at the Knoxville Museum of Art since 2007, Devenski knows how to make art understandable for all ages. She does extensive research on the art and exhibitions at the museum and enthusiastically shares her knowledge with staff and visitors. She has logged more than 670 volunteer hours in the past year, inspiring in others an interest and appreciation for art.

Knoxville Museum of Art director of development Susan Hyde accepted the donation on behalf of the KMA.

A volunteer with Knoxville Symphony Orchestra’s music education programs for more than 10 years, Volk has helped coordinate Classroom Connections and Young People’s Concerts, introducing young audiences throughout the East Tennessee to live, classical music. As Education Chair for the Knoxville Symphony League board, she has helped expand in-school programs and doubled the amount of money raised for student scholarships, ensuring that no student with a desire is unable to participate in the Knoxville Symphony Youth Orchestra Association because of cost.

Davis chose the Volunteer Ministry Center to receive his donation. For the past seven years, Davis has provided free dental services every Tuesday at the Volunteer Ministry Center Dental Clinic. Donating his time to perform desperately needed procedures such as restorations, extractions and dentures, he cares for people in a way that enhances their appearance, relieves them from dental pain, and provides them with the self-confidence they need to move forward in the process of securing permanent housing and employment. A dental missionary of 31 years, he has recently spent time teaching at a dental school in Southeast Asia and providing training to the hospital dental staff. Additionally, he finds time to teach Sunday School.

“There are so many great people that selflessly do an incredible amount of good for our community and never get the credit they deserve,” said Home Federal Bank President Dale Keasling. “People like Benjamin Thomas, whose selfless service has made a positive impact on the youth in Oak Ridge, exemplify what it means to be a Hometown Hero.”

Thomas, known to many as Deacon Ben, serves as a role model for volunteers and students alike in Oak Ridge and chose to donate his check to Mt. Zion Missionary Baptist Church. Twenty years ago, he started a program called the Monday Evening Study Session at Mt. Zion Missionary Baptist Church in Oak Ridge. Through this weekly tutorial program, Thomas helps build character in area youth and inspire them to strive toward academic excellence. Available to students in pre-school through high school, the program offers tutoring, guest speakers, awards and even workshops for parents to help students reach their full potential.

“We are happy to honor these Hometown Heroes,” said Keasling. “And we are pleased to support these programs that do such great things for our neighbors throughout the year.”

Look to next week’s Focus for more Hometown Heroes.