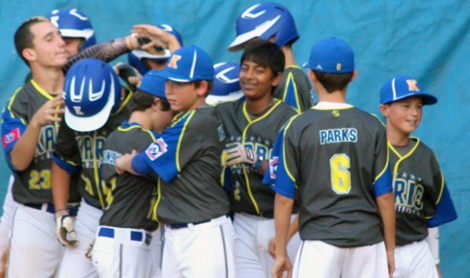 PHOTO BY CAROLYN GRENKOSKI
Karns Little Leaguers celebrate one of their seven home runs in a 23-1 District 6 championship win over McMinn County.

They didn’t move in the fences at the Karns Little League baseball field this season. It just seems that way.

With the victory, the Karns All-Stars will advance to the Tennessee State tournament in Clarksville and play the District 5 champion from upper East Tennessee in first-round action Saturday, July 19, at 3 p.m. (CDT).

The state champion qualifies for the Southeast tourney with an opportunity to earn a berth in the nationally televised Little League World Series in Williamsport, Pa.

Karns looks like it has the bats to get there, and that’s the goal.

“Looking at it as a coach, when we’re clicking on all cylinders, we’re a juggernaut,” said Parks after the power display against McMinn County. “Offensively, I think we can score as well as anyone in the country.”

Karns erupted quickly, getting a two-run homer by Cameron Fisher and a solo shot by Jonathan Nelson in the top of the first inning.

Fisher led off the the third with his second round-tripper.

Leading 7-1 entering the fourth, Karns showed off its own version of Boomsday.

Lead-off guy Zane Keener raced for a triple and Jake Wilhoit hit a line drive that cleared the fence in left-center. Three bases on balls later, John Beam blasted a grand slam to make it 13-1.

Karns batted around and scored 11 runs before the visitors could record an out.

Karns batted around twice in the fourth, tallying 16 runs on 15 hits in the frame.

Brad Grenkoski didn’t homer in the game but was 4-for-4 and scored four runs.

“We knew they were good,” said McMinn County Coach John Jenkins. “They’re impressive all the way around. There’s nobody on that team that can’t hit a home run.”

Karns got off to an impressive start in the tournament and that’s probably an understatement. They rolled past McMinn County 8-0 in Athens in their opening game. Mikey Lowe slugged two home runs to lead the attack. Starting pitcher Keener didn’t allow a hit and Mason Patel came in for three innings of relief to complete the shutout.

But Karns fans hadn’t seen anything yet.

Playing at home in the winners’ bracket finals, Karns belted seven homers, including four in a row, in a 30-0 romp past Harrogate, the top seed out of the district’s North Division.

Lukas Cook didn’t give up a hit in registering the mound win. Nolan Parks mopped up in relief.

“This is the most talented All-Star team I have had the opportunity to coach,” said Parks after the first two wins were in the book. “If the little things go our way, we certainly have the talent to make some noise all the way to Williamsport.”