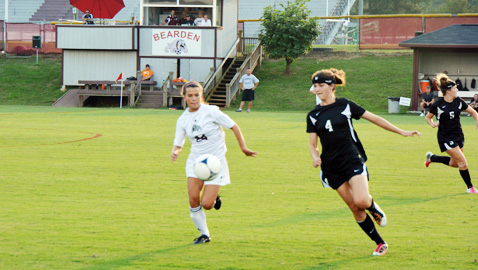 Photo by Dan Andrews.
Bearden’s Casey Riemer moves the ball forward while Houston defender Taylor White approaches in the Lady Mustangs’ 3-1 over the host Lady Bulldogs at the Bearden Invitational.

The second day of the Bearden Invitational soccer tournament didn’t go well for its host team.

The Lady Bulldogs surrendered a pair of first-half goals in a 3-1 loss to Germantown Houston Thursday night at Bruce Allender Field.

The loss knocked Bearden, which is ranked seventh in the state, from the ranks of the unbeaten and came one night after the Lady Bulldogs earned a hard-fought 3-2 win over 2012 Class A/AA State runner-up Christian Academy of Knoxville.

Houston (4-0 and ranked sixth in Tennessee) took a 1-0 lead in the ninth minute when Carolyn Heavey scored off a corner kick from Shelby Nell. Heavey’s marker was the first of two scores by the Lady Mustangs (4-0) to come off of set pieces.

“I thought we played pretty well and I was pretty happy,” Lady Bulldogs’ coach Eric Turner said. “Unfortunately, we gave up a couple of corner kicks.

“They are a good team and you can’t give those things up to a team like that. They’re really athletic and I think they were more aggressive than us.”

The Lady Mustangs took a 2-0 lead late in the first half when Paola Ellis put the ball behind Bearden senior goalkeeper Katie Cottrell, who put up a stellar effort between the goalposts for the Lady Bulldogs (3-1).

“Katie had a great game,” Turner said. “We’ll learn from this and that’s why we play these kinds of games.”

Turner said he thought the grueling match against Lady Warriors might’ve been a factor.

“I think we might’ve been a little tired after playing a tough game against CAK, but that’s not an excuse,” Turner said.

The Lady Mustangs took a 3-0 lead on a marker by senior Kelsey Pearce in the 43rd minute.

Bearden, which applied more sustained offensive pressure in the second half, got on the board when Ashley Seltzer scored off an assist from Mallory Denning.