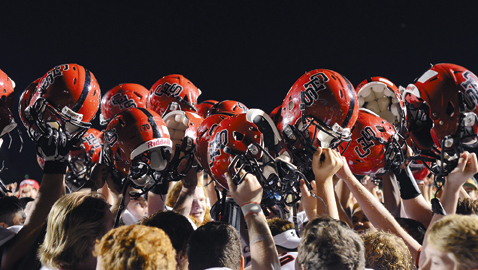 It got to be like a party on the Central side when Jeremiah Howard touched the football.

Beginning with his 47-yard catch and run to the end zone with 26 seconds left in the first half, the Central sophomore running back scored five out of the seven times he got his hands on the ball as the Bobcats pulled away for a 52-31 District 3-AAA win Friday night over homestanding Karns.

“I was feelin’ it,” said the 5-8, 185-pounder, who stole the show after teammate Josh Poplar limped off the field with an ankle injury. “When I got the ball in my hands, I just felt like I could do anything.”

And he pretty much did.

After intermission, Howard had receptions of 71 and 51 yards, a 35-yard interception return and a 48-yard run – all for touchdowns. He also was on the receiving end of two non-scoring passes from sophomore quarterback Austin Kirby, which gained 69 and 38 yards.

“I was just seeing a lot of holes and they got me a lot of passes across the middle,” said Howard. “And they just couldn’t stop me tonight.”

It was Central’s first win of the season after two losses and evened the Bobcats’ district mark at 1-1.

Karns (0-4, 0-2) looked much better than its record, particularly in the early going, as the Beavers cashed in a pair of interceptions for a 14-0 lead.

Senior speedster JaJuan Stinson got Central going with an 89-yard kickoff return for a touchdown and added another score from the 5 before Howard stepped into the spotlight.

“They’ve got some explosive backs,” said Travis Tipton, Karns’ interim head coach. “We knew that coming in. We knew Stinson was going to be hard to contain. Once he gets into space, he makes people miss. Number 10 (Howard) is the same way. That kid has got some moves.”

“We had some terrific individual flashes,” said Central head coach Joe Hassell, “but that was created by our team playing team football, which is what we try to do. And of course, we have some special talents at different places, but because we executed as a team, we were able to put those talents to good use tonight.”

The game was much closer than the final score indicated. The Bobcats led 28-24 at the end of the third quarter but racked up 24 points in the final eight minutes, starting with a 23-yard field goal by freshman Eli Holbert with 7:41 remaining.

Karns sophomore Greg Tye, who had three touchdown passes, was then picked off by Cedric Washington with 6:27 left. Three plays later, Howard took a short toss by Kirby to the house.

Central was flagged for unsportsmanlike conduct after the score and the Beavers took advantage of the penalty after the kickoff. Matt Nauman’s second TD catch cut the gap to 45-31 with 3:04 showing.

Central recovered Karns’ short kickoff and Stinson, who rushed for over 100 yards, had a 23-yard gain before Howard went the distance, faking out two defensive backs on his way to paydirt for the Bobcats’ final TD with 1:20 to go.

Blake Bowman’s interception set up the Beavers’ opening touchdown, a 24-yard catch by Nauman. Karns quickly increased its lead when sophomore Devin Harper’s pick led to his own touchdown, a grab in the end zone on a fourth-and-six play from the Central 15.

Hassell admitted he was worried when Karns took the 14-0 lead. “Despite their record, they’re a really talented team,” he said.

Karns put together drives of 12 and 14 plays long but got only a 19-yard field goal by Kevin Ellis from them for a brief 17-14 lead.

Central will host Powell in its homecoming game this week, while Karns travels to Anderson County.