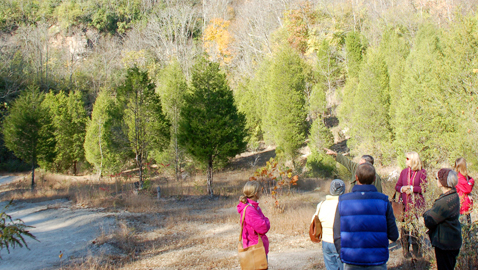 Following the acquisition of a new 22-acre property, Ijams Nature Center is expanding to 300 acres and further enhancing the South Loop on Knoxville’s Urban Wilderness. The new property, which lies between Sevierville Pike and Ijams’ Quarries, is a critically important wooded ridge top in South Knoxville. Adding it to existing acreage will ensure that natural views are forever protected and new trails will provide opportunities for both active and passive recreation.
Protecting and supporting parks is gaining momentum locally and nationally. This week, a private donor made the largest gift ever to New York’s Central Park – $100 million, highlighting the growing awareness of how critical parks are to our communities. In Knoxville, Ijams Nature Center does just that; its value is akin to Central Park.
As a gateway to the South Loop, Ijams is the jump off point to experience the Urban Wilderness. Groups like the Appalachian Mountain bike Club (AMBC) have embraced Ijams and their Tuesday evening rides are like mini-festivals boasting 50-60 riders. Another group, such as the newly formed Girls Outside, a volunteer-led group encouraging young girls to connect to the outdoors, is also starting their experiences at Ijams before heading onto other sections of the Urban Wilderness. Plus, every week, hundreds of visitors enjoy the increasing number of trails on their own.
Ijams is continuing to partner with AMBC to complete three additional miles by the end of the year to satisfy a state of Tennessee Recreational Trails Program grant. Those trails will connect to other sections of the Urban Wilderness at nearby Forks of the River and William Hastie Natural Area.  Whether you are on bike or on foot, the Ijams trail experience is truly breathtaking, and located only two miles from downtown Knoxville makes it an easy destination for Knoxville residents and the tourist set.
The seller, Mr. Jon Burnett, has long envisioned his property to be a part of the Ijams Park. Mr. Burnett grew up near the original Ijams family home on Island Home Avenue and his sister, Helene, was a close friend of Mary Ijams, one of the Ijams daughters. Mr. Burnett also served as attorney for the City of Knoxville and was an early Ijams Board Member during the 1960s. The Burnett family is now thrilled that their land will be preserved and enjoyed by all for years to come. 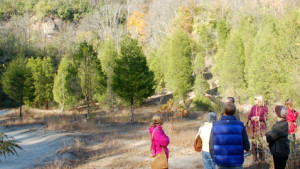