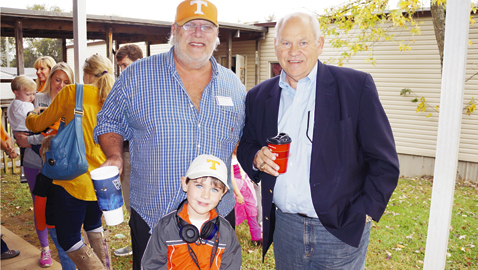 Dave Moore (left) and Phillip Fulmer, along with Moore’s grandson, J.B. Moore, share time together this past fall. It was “dress up who you would like to be like” day at Rocky Hill Elementary school, where 5-year-old J.B. is in kindergarten. Notice the head phones J.B. is wearing. He was dressed like his grandfather, a former coach.

Coach Dave Moore noticed high school athletes were not getting equal attention and that led to the start of the Careacter Star Athlete program.

“The players that got the most attention were the players that were playing, the star players,” recalled Moore, who was a head coach at Sunbright, Knoxville Catholic and Lenoir City during his career.

“We weren’t giving positive reinforcement and encouragement to those who may not play in the game. They were at practice every day and are just as important as the star players. And they really are.

“So the second I got through with coaching, I went into coaching the game of life. I was determined to find those kids through their head coaches.”

The Careacter Star Athlete program was started and has been in existence for 13 years. Student-Athletes from each high school in the Knoxville area are recognized in football and boys and girls basketball.

“Their values, what they contribute to society and their grades (are important). If the best they can do is a C let’s reward them. Everybody’s not an A student.”

Moore, a 1972 Oak Ridge High graduate who played football, basketball and baseball and also played quarterback at UT-Chattanooga, said student-athletes had long been recognized for scoring touchdowns, scoring points in basketball and pitching no-hitters, and it had become time to recognize them for their character.

“Those kids that keep persevering, that may not ever get in the game, after time goes by, they’re usually the winners in life, because they learned how to persevere,” pointed out Moore.

When a student-athletes possesses talent and character, added Moore, “then you have a true 5-star athlete.”

The No. 1 criteria for the award, said Moore, is attitude and it’s listed at the top point of the star.

“That’s where I saw the most decline in my coaching career – in attitude,” said Moore. “In teenagers and adults.”

At another point on the star are character traits – perseverance, trust worthiness, integrity. Also figured into the award are community service, grades and overall performance – “not as an athlete – but as a person,” said Moore.

Each school’s honorees are selected by head coaches and their staff.

Each honoree receives a Careacter Star Athlete T-shirt, certificate and personal letter from members of the Care Team, which includes local coaches George Quarles of Maryville, Steve Brewer of Sevier County, Matt Lowe of The King’s Academy, Clark Duncan of South-Doyle and Eddie Courtney of Farragut.

The Careacter Star Athlete program has spread throughout the nation. Moore said he once saw a boy at Myrtle Beach wearing one of the award T-shirts.

University of Tennessee, Carson-Newman University and Maryville College also participate in the Careacter Star Athlete program and their athletes receive the same awards as the high school honorees.

Former UT coaches Phillip Fulmer and Pat Summitt were the first to “come on board” with the Careacter Star Athlete program in 2002, said Moore.

“I was proud to endorse the Careacter Star Athlete program while I was at UT,” said Fulmer recently via e-mail. “I know first hand the positive impact that peers, coaches, teachers and school administrators can have in a young person’s life. I know when we can recognize and reward good actions and behavior, it perpetuates itself. The Careacter Star program does just that.

“Coach Moore has led the charge to recognize these outstanding young people.”

Baseball and softball is included in the Careacter Star Athlete program in the colleges, and Moore said he would like to add those sports and others in the future when funds are available.

“I hope I live long enough to recognize student-athletes in all sports,” said Moore. “That’s my goal. Money is the only holdup. It’s so expensive.”

The Careacter Star Athlete program is a part of Care 365, a 501c3 non-profit organization, said Moore.

Businesses or individuals who would be interested in becoming sponsors and making donations to the Careacter Star Athlete program can call 865-966-CARE for more information.