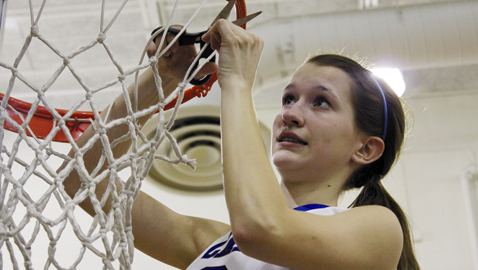 Photo by Anthony Burns – CAKSportPics.com
Amy Cross was among the first players to climb the ladder and start cutting down the net after Christian Academy of Knoxville defeated Grainger High to earn its first-ever trip to the TSSAA state basketball tournament.

The theme song of the movie Hoosiers was piped into the gym as homestanding Christian Academy of Knoxville warmed up on one end of the court and top-ranked Grainger High on the other.

But instead of looking like an underdog, CAK’s unranked girls basketball team looked like the best-kept secret in town, if not the state, especially in the early going of the Class AA state sectional showdown before a sellout crowd on March 2.

The Lady Warriors raced to a 12-1 lead and were not seriously challenged the rest of the way en route to a 65-58 victory that gave Christian Academy its first ever state tourney berth.

“These girls wanted it,” said CAK Coach Steve Denny. “This was our goal.”

“One day at a time,” answered Denny, referring to the TSSAA state tournament in Murfreesboro.

This is Denny’s fourth year as head coach at CAK. Before he took over the program, the school had never won more than 15 games in a season. Denny’s first team went 26-3 but lost in overtime to Greeneville in the state sectional round. After a couple of rebuilding seasons, the Lady Warriors kicked down the door.

Cheyenne Hooper’s change of heart had a lot to do with it. For awhile this season, the 6-foot-6-inch sophomore hadn’t been contributing much on the basketball floor.

“All of a sudden, she said ‘Let’s go!’,” said Denny, recalling the change in Hooper. “She had been averaging three points. The second Webb game she turned it on.”

An example of what Hooper can do: she had a triple double in the win over Grainger – 12 points, 10 rebounds and 12 blocks.

“She’s being recruited heavily in volleyball,” pointed out Denny, who is also the school’s athletic director. “A school our size thrives on two-sport athletes. Anna (Hammaker) hosted a team meeting after a loss to Alcoa. It was for players only. It was a huge turning point in our season.”

Hooper came out of the meeting with a different perspective.

“I don’t think my heart was completely in it (basketball),” she recalled after her strong performance against Grainger. “I realized I had to step in and play. It was an almost 100 percent for-the-team decision. I can let myself down, but I can’t let my team down.”

This could be Hooper’s last season in basketball.

“I’ve decided I’m going to focus on volleyball this summer,” she said. “I hope to go D1.”

Hammaker, also a sophomore, said she was thinking about last season – when she and Hooper won a state championship in West Virginia playing at Greenbrier East High School – when she called for the special team meeting. Also knowing this could be Hooper’s last season in basketball, Anna recalled her message to Cheyenne: “Let this be a good one. Let the home girls experience it.

“Cheyenne, she’s our ticket. She’s the main key to us winning state.”

CAK had balanced scoring in the win over Grainger, with Kaycee Heitzman and Kelsey Naler scoring 15 each, Hammaker 14 and freshman Taylor Dodson nine.

“It’s not how we wanted to finish up,” said Grainger Coach Justin Combs, whose team went undefeated in the regular season and finished 32-2. “We had the goal of going all the way.

“We got off to a slow start and never could get back in the game . . . It seemed like they would hit a big shot every time we would get in striking distance. Hooper hit big shots. Dodson hit big shots. Hammaker was a handful as usual.

“It’s a credit to them. They responded to the moment a little better than we did.”

CAK was scheduled to play Macon County in Friday night’s semifinal round. If they passed that test, the Lady Warriors would advance to the Class AA state title game.