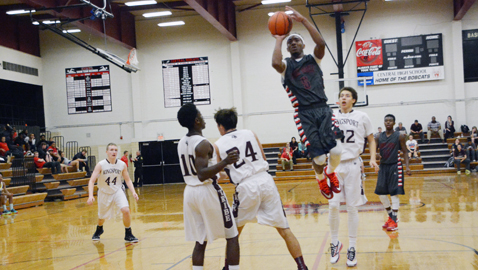 That was the good news. But the Cherokees, who got several players back from the school’s football team which just wrapped up a postseason run.

South-Doyle, however, had just one full practice to prepare for a showdown against Kingsport Dobyns-Bennett in the opening round of the Central Thanksgiving Classic and that was painfully evident as the Cherokees came up on the short end of a 78-63 decision against the Indians in Fountain City.

South-Doyle (2-2) struggled from the outset and fell behind 8-0 when Jarvis Brooks made a basket less than two minutes into the contest. After South-Doyle first-year head coach Brian Stewart called timeout, the Cherokees closed out the opening frame with a modest 9-7 run to pull to within 15-9.

The Cherokees never led in the game but they kept fighting. The two teams matched points in an evenly-played second quarter and the ‘Kees were down 32-26 at halftime.

South-Doyle, which trimmed its deficit to 17-15 when Jarquese Goines scored early in the second quarter, scored first after halftime when Joquez Bruce buried a long range jumper to make the score 32-29. After the Indians scored, Miles Thomas hit two of four foul shots to make the score 34-31. But South-Doyle wouldn’t come any closer as Dobyns-Bennett stormed back with a vengeance. The Indians opened a 57-41 lead by the end of the third frame.

“We had our full team back but we only had one practice with everybody together and that was [Sunday]. We’re just limited on things we can do. We have 12 guys and they all can play. We just have to find the right combinations and we have to get some guys in basketball shape.

“They’re a great team,” Stewart said of the Indians. “They’re one of those teams that you want to play. Playing them will get us ready to play against those teams in our district.”

Bruce scored 20 points in his season debut for the Cherokees. He’s committed to play football at Tennessee. Goines added 17 points and Thomas finished with 11.