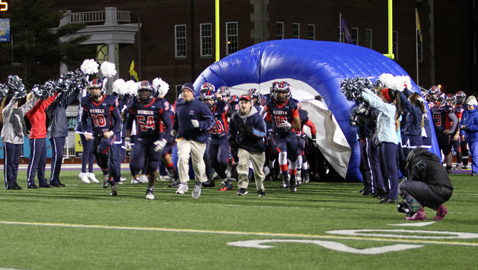 Reflecting on West’s 28-27 loss to Henry County in this year’s TSSAA Class 5A state football title game, Coach Scott Cummings, in an e-mail, said, “Story of the game may have been our defensive injuries.

“Losing Max Bacon early was a killer. He was our second leading tackler, had six interceptions and was our secondary’s leader. Then Noah Hoxie hurt his hip and couldn’t run. We already didn’t have Alex Burch. Khalil Watford had to go out awhile with an ankle. Shawn Highfill hurt his shoulder late, too. Crazy.”

West, playing in its first-ever state finals, took a 14-0 lead in the opening eight minutes at Tennessee Tech’s Tucker Stadium in Cookeville.

“We jumped on them early, but Henry County was resilient in coming back harder,” said Cummings. “Give their kids a ton of credit for effort.”

In a thrilling finish, the Rebels, trailing by one, got to Patriots’ 27-yard line and were close to field goal range but lost 12 yards on a second down play when the ball was knocked out of their quarterback’s grasp.

“Yes, I was thinking field goal at the end,” said Cummings. “We still had a timeout, and if we hadn’t lost all those yards, we would have had time to center the ball and call the timeout for a reasonable field goal try. After the loss of yardage, it would have been from 57 yards and just too long.

“Kids were really crushed over losing. Some didn’t handle it the way I would have liked. But most were true men and showed tons of character.”

With 11 starters returning, West might get another state title shot in 2014. The Rebels’ offensive returnees will include quarterback Seth Marshall and speedy halfback Nathan Cottrell, plus tight end Cameron Trainer, center Blake Easley, guard Ryan Perry and tackle Isaiah Mobley.. Defensively, Bacon, Burch and Johnny Pridemore will be back in the secondary and Hoxie and Highfill as linebackers.

CHEROKEES ENCOURAGED: South-Doyle Coach Clark Duncan, whose team lost 32-27 at Anderson County in the second round of the Class 5A playoffs, believes his football program is on the right track.

“Looking back on the season and realizing the progress we made is very encouraging for the future of the South-Doyle football program,” said Duncan in an e-mail. “I believe the experience our young men gained will help us continue to reach our goal, which is to advance deep into the playoffs and give ourselves a chance to win a state championship.

“This senior class has accomplished more than any other class in the history of South-Doyle football. They were the first class to win five games in a row, have back-to-back winning seasons, qualify for the TSSAA playoffs three years in a row and win in the first round in over 20 years.

“We hate to see this group of seniors go, but it is exciting to know we were predominantly a junior team. We will not graduate any of our skill players. Joc Bruce rushed for just under 2,000 yards and Brody Rollins for over 1,000 yards. We are excited about getting back into the weight room and getting ready for what we hope will be an exciting 2014 season.”