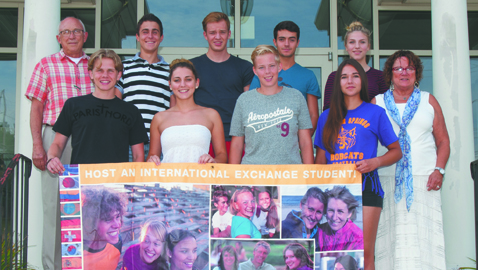 “We cover rules and regulations,” Lendelle said. “We talk to them about keeping their grades up, and they have to maintain a C average. These kids are good,” he emphasized.

EF Exchange Year has been operating since 1965 and is one of the biggest international high school study organizations in the world. The program placed 2600 students this year, Lendelle said, and EF Exchange Year hopes to place 3,000 students next school year.

One of those students, Damian Meier, is staying with the Clarks and is a junior at West High School. Meier is from Lucerne, Switzerland.

He came to the U.S. during the first week of August. It is his first time here in America. “The English language is difficult,” he said. He is taking U.S. History, math, ROTC, and gym this semester.

Damian is very appreciative of the food here in America. “I love the food. You don’t have to eat the same every week.” He mentioned one food he enjoys in Switzerland, fondue. He said fondue is pretty scarce in the states and is a birthday treat in Switzerland.

Damian played soccer in Switzerland and now plays football for the Rebels. He does kickoffs and field goals. The first time he kicked a field goal, Damian said, he closed his eyes and kicked it as far as he could.

In contrast with America, Swiss men have compulsory part-time military service, Damian said. “In America it’s more serious than Switzerland,” he said. “People in Switzerland are not as pro-military.” He can choose when to complete his military service as long as he serves between ages 19-34.

For personal growth, Damian says he will learn to live without his family and friends. He’s looking forward to learning better English and a new culture.

He had great praises for America. “I think America is pretty cooler than Switzerland. Every time there is something different to do here. People are very friendly.”

Besides Damian, the Clarks are hosting another international student, Anton Bergstrom of Copenhagen, Denmark. Anton has already had three years of schooling in Denmark.

Anton is taking International Baccalaureate (IB) Chemistry, English, math, strength and conditioning, and U.S. History this semester. He finds the classes very interesting and is used to a lot of homework.

His most difficult class is IB Chemistry. His favorite classes are math and strength and conditioning.

Anton likes the weather and the Tennessee people. “I love it. Of course the weather, it feels like home,” he said.

He also is a kicker for the Rebels’ football team and loves the food here, especially Chik-fil-A.

While he is here in the states, Anton is looking for a chance to become more independent. In Denmark, he was used to his mom doing everything for him.

Along with Damian, Anton wants to go to UT football games. He said he is looking forward to the atmosphere the most. “Just being there is going to be awesome.”  His professional football team is the Baltimore Ravens.

While he has visited Atlanta a few times and also California, Anton likes the slower lifestyle in Tennessee. “It’s more laid back,” he said.

When he goes back to Denmark, he’ll have had three years of gymnasium and have to choose a career path. He would like to be a ship broker and sell ships.

“I just know that its’ going to be a great year,” Anton said.

Lendelle said playing sports is an avenue for the international students to meet people. “It makes a difference when kids play sports. They get more friends,” Lendelle said.

Lendelle said he’s been a coordinator for 25 years. The coordinator work is all-volunteer. The EF Exchange Year is approved by the U.S. State Dept.  Sue works with imprisoned juvenile students and Lendelle works with special needs students.

For the selection process in choosing a student to host, Sue said hosts look at student files and choose the ones they like. “These kids have spending money and insurance,” she said. “They have to write an essay. They have to pay between $8-10,000 to participate.”

“We’ve got 9 students this year, one at South Doyle, three at West, one at Hardin Valley, one at Karns, two in Oliver Springs, and one in Sunbright.”

A bonus, the Clarks said, is that they get to visit the students and their families back in Europe from time to time.  “You get to meet grandparents, aunts, and uncles,” Sue said.

“We’re glad to have more this year,” Lendelle said.

For more information on how you can host an international exchange student, please visit  www.efexchangeyear.org or email ef_lendelleclark@yahoo.com  or call  865 691- 0627.