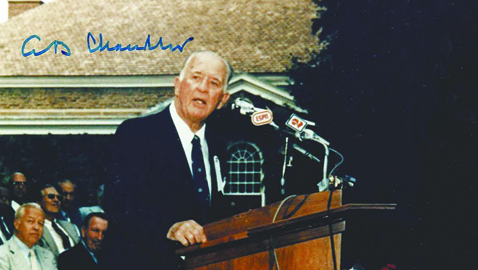 Albert Benjamin Chandler had once again defeated the state machine and won election to the governorship by a record majority twenty years after having first been elected governor.

Unfortunately, Happy Chandler’s second administration was not going as well as his first.  In the years Chandler had served as U. S. senator and Commissioner of Baseball, his successors as governor had instituted many social programs that had driven up the cost of government.  Governor Chandler was struggling to find a way to pay for those same programs while implementing his own campaign pledges.

Chandler sought to delay the inevitable; his proposal to the state legislature included almost fifty million dollars in spending in excess of the anticipated revenue.  A package of new taxes and increases in others was put before the legislature, including a surtax on the production of whiskey.

It soon became apparent that despite heavy majorities in both houses of the legislature, Governor Chandler could not summon a majority for his own proposals due to opposition inside his own party.  The leader of the opposition to A. B. Chandler inside Kentucky’s Democratic Party was Senator Earle C. Clements.  Himself a former Congressman and governor, Clements had risen in the Senate’s hierarchy quickly, becoming Senate Majority Leader Lyndon B. Johnson’s deputy.  Clements and his successor as governor, Lawrence Wetherby, had fought Happy Chandler’s proposed return to the governor’s office in 1955.  Clements had selected Bert T. Combs, a judge on Kentucky’s Court of Appeals, to oppose Chandler for the Democratic nomination.  Those state legislators close to Clements and Wetherby had no intention of cooperating with Governor Chandler to make his administration a success.

Not easily frustrated, Governor Chandler soon concluded to pass his program through the legislature, he required the help of Republicans.  Throughout his second administration, Chandler funneled projects and patronage to Republican allies in the legislature to ensure passage of his proposals.

The Republicans also received an unexpected benefit from Chandler’s reign as governor.  Both of Kentucky’s seats in the United States Senate were up for election.  Senator Earle C. Clements’ term was set to expire and there was a special election to determine a successor to the late Alben W. Barkley, who had come out of retirement to defeat Republican Senator John Sherman Cooper in 1954.  Barkley had died suddenly, literally in mid-speech.  Barkley’s death in 1956 complicated matters considerably for Kentucky Democrats.  Former governor Lawrence Wetherby was selected as the Democratic nominee to run for the four years remaining in the late Senator Barkley’s term.

Republicans had been competitive in Kentucky elections, winning the governorship in 1943 and John Sherman Cooper had been elected to the U. S. Senate in 1946, losing in 1948, but winning again in 1952 before losing to Alben Barkley in 1954.  President Dwight D. Eisenhower personally pressed Cooper to run for the Senate again in 1956.  The immensely popular former general would be heading the Republican ticket and Congressman Thruston Morton had been recruited to challenge Senator Clements.  Both Clements and Wetherby faced serious GOP competition in the general election.

Senator Clements’ own reelection bid was hampered by Lyndon Johnson’s heart attack, which required Clements to linger in the Capitol, keeping him away from Kentucky.  Clements did not seem to think his own reelection was in peril, as when he did return to Kentucky, he seemed to campaign more for Lawrence Wetherby than he did himself.

Governor Chandler had not entirely given up his hope of being elected president; he attended the 1956 Democratic National Convention in 1956 angling to be selected as the nominee of his party.  Even the governor’s closest political friends believed 1952 nominee Adlai Stevenson would once again receive the nomination, but Chandler doggedly believed he could win.  He was embarrassed to received fewer than forty votes at the convention and the experience left Happy Chandler quite bitter.

Returning home to Kentucky, the coming senatorial elections provided an ideal situation for Happy Chandler.  Governor Chandler and Senator Earle Clements were long time political enemies and each headed a different faction of Kentucky’s Democratic Party.  Wetherby was closely aligned with Clements and neither of the senatorial nominees received the support of the governor or his administration.  In fact, Chandler quietly threw the weight of his own organization behind the Republicans.

Eisenhower carried Kentucky and John Sherman Cooper returned to the United States Senate by beating Lawrence Wetherby by about sixty-five thousand votes.  Senator Earle Clements lost to Congressman Thruston Morton by a razor thin margin of some seven thousand votes.  The 1956 election had removed Happy Chandler’s most influential opposition inside the Democratic Party.  It would be sixteen years before Democrats won another senatorial election in Kentucky.

Perhaps the biggest achievement of Chandler’s second term as governor was the funding of a medical center for the University of Kentucky in Lexington.  Chandler himself later said it was the accomplishment in his second term of which he was the most proud.  The medical center would later be named in his honor.

As with many governors during the decade of the 1950s, Chandler faced issues involving integration.  When several black students in Sturgis, Kentucky prepared to enter the local high school, they found the way barred by some five hundred people.  Governor Chandler responded by calling out the National Guard, who arrived with tanks.  Still, it took almost three weeks before the situation was resolved peaceably.

At the expiration of his term in 1959, Happy Chandler threw his support to his lieutenant governor, Harry Lee Waterfield, to succeed him.  Although having lost his own reelection bid, former Senator Earle C. Clements once again backed Bert T. Combs to run for governor.  It was a bitter fight and Bert Combs won by some thirty-three thousand votes.  It was yet another bitter disappointment for Happy Chandler.

Governor Chandler’s bitterness boiled forth when former President Harry S. Truman journeyed to Kentucky to campaign for Combs and the Democratic ticket.  Wilson Wyatt, a former official in Truman’s administration, was the candidate for lieutenant governor.  Happy did not bother to observe the niceties, failing to welcome the former president to Kentucky.  Instead, Happy wrote a letter to Truman, scoring Bert Combs as a liar, among other things.

Unlike 1956, it was not a Republican year in Kentucky and Combs was elected governor easily.

After leaving the governor’s office for the second time in 1960, Happy kept up his interest in politics and once again hoped lightning might strike at the Democratic National Convention.  Chandler’s notion that John F. Kennedy was “too young” to be the standard bearer for the Democrats proved to be both old fashioned and just plain wrong.  Once Kennedy was nominated, Happy floated the idea that he would be an ideal running mate for the senator from Massachusetts.  Evidently JFK ignored Chandler’s advice and chose Senate Majority Leader Lyndon Johnson instead.

It soon became clear that Happy Chandler had not abandoned politics in his native state.  Chandler announced he would be a candidate for governor yet again in late 1962.  Chandler recruited his former lieutenant governor, Harry Lee Waterfield, to once again be his running mate in the 1963 election.  Governor Bert T. Combs, unable to succeed himself, announced he was backing Edward T. Breathitt to succeed him.  Breathitt had held several posts in the Combs administration and proved to be adept at modern politics.  Happy Chandler’s own political career went back more than thirty years and things were changing.  The former governor was as colorful as ever and easily entertained the crowds that gathered to hear him, but Happy Chandler seemed oddly out of place in the most important medium of the time: television.  “Ned” Breathitt was not only considerably younger than the sixty-five year old former governor, but handsome and sleek.  Breathitt adapted well to television, using conversational tones, while Happy Chandler seemed both outmoded and outdated.

In the past, Happy Chandler had been a master at finding a relatively minor issue and picking at it to successfully enrage voters, whether it be African paneling in the governor’s office or a $20,000 rug.  All to often, the charges were not true, but Happy shrugged off whether his accusations were true, replying “people like to hear them.”  Once again, Happy tried to pick at what he considered wasteful spending, but he finally met his match in Ned Breathitt who charged that Chandler had voted to declare war against Germany, Japan and Italy in 1941, but had promptly resigned his own commission in the Army reserves.  Infuriated, Happy tried to explain that he had wanted to go to war himself, but had been told by then Secretary of War Henry Stimson that he could better serve the country by remaining in the United States Senate.

The year 1963 brought the end of A. B. Chandler’s political career.  Ned Breathitt won the Democratic gubernatorial nominee by better than sixty thousand votes.  Happy did not gracefully accept the verdict of the people and tried to return to the governor’s office again in 1967 and 1971.

When he lost the nomination in 1967, the former governor bolted the party to support Republican Louie B. Nunn, who won the general election.  It was Governor Nunn who first appointed Happy Chandler to what would be three terms on the University of Kentucky’s Board of Trustees.

The 1971 marked Happy’s last run for political office.  That year the former governor didn’t even bother to compete inside the Democratic primary, preferring to run as an Independent.

His days in elected office over, Happy Chandler settled in to a comfortable life at his home in Versailles, Kentucky.  Happy remained active until the end of his days and was thrilled when he was inducted into the Baseball hall of Fame in 1982.  Chandler was also the subject of a film documentary when he was eighty-nine years old.

Occasionally, Happy Chandler could exercise some influence, as when his endorsement of Wallace Wilkinson for governor helped to determine the outcome of the race.  Chandler’s time on the Board of Trustees for the University of Kentucky was marred by his use of a racial epithet, which cause quite a controversy at the time.  Chandler’s subsequent apology and explanation likely only made matters worse.

Still, nobody questioned Happy Chandler’s love for the University of Kentucky and the former governor was a familiar sight at sporting events.  Usually nattily dressed in a blue blazer and a sweater the hue of blue signifying Kentucky’s colors, Happy would totter to center stage and sing his rousing rendition of “My Old Kentucky Home” and he could still bring tears to the eyes of his audience, both young and old.

Albert Benjamin Chandler, like all human beings, began to become more and more frail as he aged.  He died in Versailles on June 15, 1991 at age ninety-two, less than a month shy of his ninety-third birthday.

Laid to rest in a Presbyterian cemetery near his home, Happy Chandler had lived a full and rich life.  More over, for most of his long life, he lived up to his well-deserved nickname and was truly “Happy.”