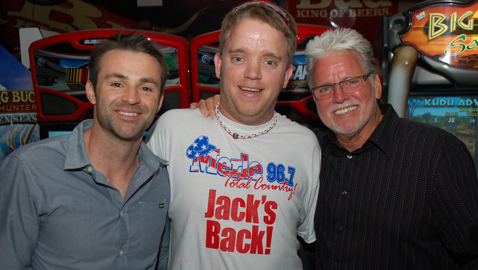 A “boot load” of fans turned out for the Jack’s Back Party at Cotton Eyed Joe on Thursday, May 17. Jack Ryan was a live wire electrifying his faithful fans who have followed him from WIVK to his new home at Merle FM.  Many in the crowed expressed extreme disappointment in WIVK’s decision to switch from Ryan to syndicated show and they are thrilled he was picked up by Merle.

“Jack’s the first one I heard on WIVK,” said fan Garrett Strand. “He’s a great guy and I don’t plan on listening to WIVK anymore.”

Many great acts took the stage including Holly Norman, Sourthern Drawl Band, and Fairview Union.  Local singer/songwriter Stephen Hunley gave the audience a glimpse into his incredible talent.  The piece de resistance for most of the crowd was when Stephen’s uncle, Con Hunley, took the stage.  Con Hunley made many in the audience swoon and sway to familiar ballads and songs, some from his new CD, “Wayfarin’ Stranger.”

Merle FM also gave away free Jack’s Back t-shirts and tons of other prizes including a car with $1,000 in cash inside.  “We’re turnin’ some heads tonight,” said Ryan who absolutely did turn heads all night, enjoying good vibes from old fans and new as he thrilled the audience with prizes and good music throughout the party.  It is obvious observing him that Jack Ryan is not just a dynamic personality.  He makes each artist and audience member feel like more than a fan,  which is why so many who have been listening to him over the years recognize his voice as one of their own.