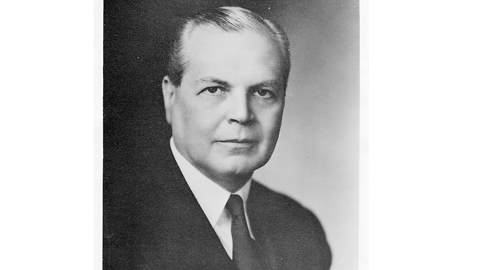 From the author’s personal collection
Congressman James B. Frazier, Jr.

James Beriah Frazier, Jr. came from one of Tennessee’s most distinguished families; young Jim was the son and namesake of a former governor and United States senator.

Born June 23, 1890 in Chattanooga, Tennessee, J. B. Frazier, Jr. went through the public schools before attending the Baylor School in his home city.  Young Jim Frazier then went off to Charlottesville to attend the University of Virginia.  After completing his course work at the University of Virginia, Frazier then enrolled in the Chattanooga College of Law, graduating in 1914 when he was twenty-four years old.

Jim Frazier interrupted his life and law practice to volunteer for service when the United States entered World War I.  Frazier was discharged from the Army with the rank of Major and returned to his home and law practice in March of 1919.  Young Jim was fortunate to be able to practice law with his father, who remained one of Tennessee’s most distinguished citizens.  The former governor was still very much in demand as a speaker at various events all across the state.

Frazier’s entry into politics came through the revival of the national Democratic Party in 1932 when New York Governor Franklin Delano Roosevelt defeated incumbent President Herbert Hoover.  The most influential politicians in Tennessee, including Senator Kenneth D. McKellar, Senator Cordell Hull, and Congressman E. H. Crump, leader of the Shelby County political machine, had all backed Roosevelt prior to his nomination.  Roosevelt selected Senator Hull to serve as Secretary of State, a position he held longer than any other individual in history.  With the arrival of Franklin Roosevelt’s New Deal, McKellar was in an ideal situation to make recommendations and it fell to the senior senator to control most of the appointments and patronage in the State of Tennessee.

Naturally, the Republican appointees who had served under President Hoover’s administration were expected to be replaced and one of Senator McKellar’s recommendations was James B. Frazier, Jr. to serve as United States Attorney for the Eastern District of Tennessee.  McKellar had known Jim Frazier for most of his life, as the senator was friends with the young man’s father.  McKellar was also a great admirer of Jim Frazier’s mother, Louise Keith Frazier.  Toward the end of September 1933, Frazier’s nomination had been confirmed by the United States Senate and he would remain in office until his resignation on April 12, 1948.

The newly appointed U. S. Attorneys in Tennessee all had ties to Senator McKellar; William McClanahan, U. S. Attorney for the Western District of Tennessee, had briefly worked in McKellar’s Washington office and served as his secretary.  McKellar would frequently visit the McClanahan home in Memphis whenever he was back in Tennessee and it was not unusual for the senator to join the family for dinner.  The youngest McClanahan daughter, Millie, recalls her mother using an old pair of the senator’s white trousers for a sewing project.

Not only was the appointment a comfortable one with a good salary, it afforded young Jim Frazier a political post that would give him a higher profile in the community.

Frazier had to be reappointed every four years and when the time came for him to be appointed yet again, the future Congressman got caught up in Tennessee politics.  Senator Nathan L. Bachman had died on April 23, 1937 and Governor Gordon Browning had appointed George L. Berry to serve until a special election could be held in 1938.  Initially, Berry believed he had an agreement with Senator McKellar to divide the patronage and appointments, giving Senator Berry control over those appointments made in East Tennessee.  K. D. McKellar was highly popular in East Tennessee and the senator was likely congenitally unable to share such appointments.  McKellar was not especially fond of his new colleague and it was not long before an alarmed Jim Frazier notified the senator Berry did not seem to be for his reappointment.

Unfortunately for Berry, he had written Frazier previously to indicate he was for Frazier’s continued service as U. S. Attorney for Tennessee’s Eastern District.  McKellar advised Frazier to forward a certified copy of Senator Berry’s letter to his Washington office.  The wily McKellar quickly and effectively out-maneuvered Senator Berry, who merely accomplished irritating the Frazier family and the family’s many friends in Hamilton County.  Senator McKellar brought Frazier’s nomination out of the Senate’s Judiciary Committee where it had briefly languished and  won a quick confirmation before the full Senate.

Berry was defeated in his bid to win election to the Senate seat to which he had been appointed following a ferocious fight amongst Tennessee Democrats.  Senator McKellar and Ed Crump of Memphis joined to eliminate both Governor Gordon Browning and Senator George Berry politically and they were successful.

Another death briefly tempted Jim Frazier into resigning his office and becoming a candidate for office.  Sam D. McReynolds had been the Congressman from Tennessee’s Third Congressional District since 1923; McReynolds had just been reelected to another two-year term in 1938, but his heart was giving out and he died on July 11, 1939.  There would be a special election to determine McReynolds’s successor and there was considerable speculation Jim Frazier would enter the race.

Frazier would certainly have been a strong candidate and it is interesting to contemplate just how different Tennessee’s political history would be had he run and won.  Frazier’s hesitation likely had less to do with political concerns than personal matters.  Jim Frazier had married late in life and had in fact just married Elizabeth Hope on March 30, 1939 when he was months shy of his forty-ninth birthday.  Their union would soon produce their only child, a daughter named for her mother, Elizabeth Hope Frazier.

As it turned out, Frazier’s entry into Congress was merely delayed.  When Estes Kefauver announced he would not seek reelection to Congress in 1948, but would instead seek election to the United States Senate, Jim Frazier resigned his federal office to become a candidate.

Jim Frazier faced two serious opponents in the 1948 Democratic primary, John C. Hammer and Robert A. Morrison.  Despite a lively primary campaign, neither Hammer nor Morrison managed to make a dent in Frazier’s popularity, especially in his native Hamilton County.  Frazier carried seven of the fourteen counties comprising the Third Congressional District and won a huge majority inside Hamilton County.  Frazier’s margin of victory was almost the total of the number of votes received by his closest opponent.

J. B. Frazier, Jr. began a twelve year Congressional career when he was fifty-eight years old.  Frazier was a stately-looking man and as he aged, his hair turned silver, giving him the classic appearance of a Congressman.  Friendly, engaging, and diligently looking after the interests of his constituents, Jim Frazier remained popular inside his district.

Assigned to the House Judiciary Committee, Congressman Frazier tended to the traditional duties of his office and was regularly reelected to office every two years.  Frazier was challenged by one Fred Hixson in the 1950 Democratic primary, but again demonstrated his strength and personal popularity by carrying every county in his Congressional district.  Opposition to Congressman Frazier began to dwindle. He finally faced another serious opponent in the 1960 primary in the person of Cooper Holt.  Once again, Congressman Frazier carried every county in the district.

The situation in 1962 was quite different.

Congressman James B. Frazier would turn seventy-two before the primary election and faced the most serious challenge of his career when Wilkes Thrasher, Jr. announced his candidacy.  Thrasher came from a highly prominent family and was the son of a former Hamilton County judge.  Young and handsome, Wilkes Thrasher, Jr. seemed to be the embodiment of the new age of “Camelot” under the administration of America’s new president, John F. Kennedy.

Congressman Frazier had incurred the wrath of some Kennedy administration officials as he had voted against the president’s Medicare proposal as a member of the powerful House Ways and Means Committee.  Frazier was a more traditional and conservative Democrat and Wilkes Thrasher challenged the Congressman from the left.  Thrasher campaigned for federal aid to education and ran as an all-out supporter of the Kennedy administration.  Tennessee’s senators, Estes Kefauver and Albert Gore, were both considerably more liberal than Jim Frazier and the Thrasher campaign received quiet support from the senators.

Frazier was immediately put on the defensive and was at a serious disadvantage, as he was oddly fatigued during the campaign.

The primary election was remarkably close; Frazier lost by 269 votes.  For the first time, Jim Frazier had lost his native Hamilton County.

It was a pyrrhic victory for Wilkes Thrasher, Jr.  The Republicans had not won a Congressional election in the Third District since 1920, but the GOP had nominated a savvy thirty-one year old businessman, William E. Brock, III.  The grandson and namesake of a Democratic U. S. senator, Brock proved to be a masterful organizer and he and the Young Republicans of his district organized right down to the precinct level and surprised virtually everybody when he won the general election.

Many of Congressman Jim Frazier’s strongest supporters never reconciled themselves to supporting Wilkes Thrasher, Jr. and voted for Brock.  It was a turning point in Tennessee politics and foreshadowed the revival of the two-party system in the Volunteer State.

Congressman Frazier’s loss was naturally a blow, but as it turned out, his defeat likely saved his life as he was suffering from cancer and didn’t know it.  Frazier was successfully treated and returned home to Chattanooga and retirement.

Surviving cancer, former Congressman J. B. Frazier, Jr. lived in his Chattanooga home for a number of years, finally succumbing to old age on October 30, 1978 at age eighty-eight.