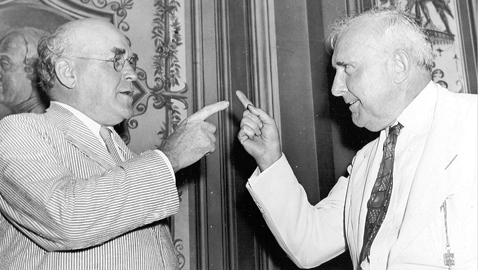 For decades the Bankhead family was one of the most politically prominent in the state.  Today, perhaps the best-known member of the family is the late actress Tallulah Bankhead, yet Miss Bankhead’s father William was Speaker of the U. S. House of Representatives while her Uncle John was the United States Senator from Alabama.

The Bankhead dynasty was originated by John Hollis Bankhead, who enjoyed a rather colorful career.  The elder Bankhead had been the Warden of the Alabama State prison at Wetumpka before being elected to Congress in 1886.  Bankhead remained in Congress until he was defeated in the Democratic primary in 1906.  Bankhead was not out of Congress long for he was appointed to the U. S. Senate when elderly Senator John Tyler Morgan, a former Confederate, died in office.  Bankhead was elected by the state legislature twice and won a direct election by the people in 1918 to stay in the Senate and like his predecessor, died while in office on March 1, 1920.

The younger of the Bankhead sons, William, was the first to follow his father into politics, winning election to Congress in 1916.  Will Bankhead would remain in Congress for the rest of his life, finally serving as Speaker.

A Bankhead sister, Marie, was an accomplished woman in her own right and ran the Alabama Department of Archives for many years.

The old senator’s son and namesake, John H. Bankhead, II was born July 8, 1872 and was a practicing attorney.  The Bankhead family had been involved in several successful businesses, but many of them had invested heavily in Florida real estate and watched helplessly as the real estate boom went bust, costing them a significant amount of money.  The younger Bankhead proposed to follow his father into the United States Senate and entered the 1926 Democratic primary as the favorite.  Despite a well-financed campaign, John H. Bankhead, II was upset by an upstart Birmingham lawyer by the name of Hugo L. Black.  Black had been a member of the Ku Klux Klan, which was quite a powerful political force at the time.  Black’s membership in the Klan helped him to defeat John Bankhead and he remained in the Senate until President Franklin Roosevelt tapped him to serve on the U. S. Supreme Court.  Black had already been confirmed to the lifetime job when his former Klan membership came to light.

John Bankhead’s opportunity to run for the Senate again came about due to the actions of Alabama’s other U. S. Senator J. Thomas Heflin.  Tom Heflin had been a long-time member of Congress before succeeding John Bankhead, Sr. in 1920.  That Tom Heflin was a virulent racist and bigot is unquestionable.  Heflin once shot an African-American man in Washington, D. C. while riding a street trolley.  Heflin proved to be a poor shot and wounded an innocent bystander as well and when questioned by authorities and asked his profession, Heflin is alleged to have replied, “I’m a Democrat.”

Heflin dressed the part of an old fashioned senator, was a masterful storyteller, many of which he told in a Negro dialect.  As well as a florid orator of the old school.  Heflin’s bigotry extended well beyond the African-American community and when Democrats nominated New York Governor Alfred E. Smith, a Catholic, for president in 1928, the Alabama senator bolted the party.  Heflin spoke long and loud about the evils of Smith’s religion and Alabama came close to delivering its votes to a Republican.  Heflin’s apostasy was also his political undoing.  Alabama Democrats, many of whom shared Heflin’s distaste for Smith’s Catholicism, feared a two-party state even more than they did the Pope.  The rules of the Alabama Democratic Party were rewritten specifically to bar Senator Heflin from entering the primary election in 1930.  John H. Bankhead, II was the Democratic nominee and Tom Heflin sought reelection in the general election as a “Jeffersonian Democrat”.  Bankhead beat Heflin easily, although Tom Heflin challenged the results, claiming voter fraud on an epic scale.  The Senate went so far as to allow Tom Heflin to speak on the Senate floor despite the fact it had seated John Bankhead.  Heflin made a lengthy oration on his on behalf, but the Senate voted to officially recognize the election of John H. Bankhead, II.  Heflin was stunned by the vote and departed from the Senate floor a broken man.  Although Heflin would make several attempts to return to either Congress or the Senate, his electoral career was at an end.

John H. Bankhead, II came into the United States Senate during the Great Depression and his chief concern were agricultural issues and farmers.  Bankhead had almost an obsession on the topic of cotton and Senator Bankhead wrote substantial parts of many bills approved during Roosevelt’s New Deal on agricultural and cotton, not the least of which was the Cotton Control Act of 1934.

The Bankhead brothers, Will and John, remained very close and John was very proud when Will was elected Speaker of the House following the death of Tennessean Joseph W. Byrns in 1935.  Senator Bankhead was himself easily reelected in 1936 and both Bankheads lent strong support to the Roosevelt administration.  The devotion of the Bankheads was tested when Will ached in his bones to become FDR’s running mate in 1940.  Incumbent Vice President John Nance Garner, the salty “Cactus Jack” from Texas, was himself a former Speaker of the House and Garner, much more conservative than Roosevelt, was implacably against a third term for any man.  Garner was going home to Uvalde, Texas and clearly there would be a new Vice President of the United States.  Will Bankhead desperately wished to run with FDR in 1940 and made a strong bid for the nomination even after Roosevelt himself made it clear that he preferred his Secretary of Agriculture, Henry A. Wallace.

By any stretch of the imagination, Wallace was a mighty strange choice.  A Republican from Iowa, Wallace had never been elected to any office previously and his nomination would do little to aid Roosevelt’s bid for an unprecedented third term.  Wallace was also something of a mystic, a dreamer, and while a millionaire, was notoriously cheap in his every day life.

The Bankheads were infuriated by the notion of Henry Wallace becoming Vice President of the United States and many delegates were on the verge of revolting.  FDR was taken aback by the hostility of his own party toward his choice for a running mate and finally told aides that he would refuse the presidential nomination if delegates did not ratify Wallace’s own nomination.  First Lady Eleanor Roosevelt flew to Chicago to personally address the Democratic National Convention on behalf of Henry Wallace, which did little to assuage the anger of rebellious Democrats who booed the mention of Wallace’s name.  Party bosses forced entire delegations to support Roosevelt’s selection of Henry Wallace, but they made their true feelings clear by booing Wallace so loudly that it reduced Mrs. Ilo Wallace to tears.  Wallace himself was finally nominated, but the open hostility was so great he did not make the traditional acceptance speech.

Both Will and John Bankhead were resentful of the treatment accorded them by the President, but the Speaker was ailing and did not survive the fall campaign, dying of a stomach hemorrhage on September 15, 1940.

John never ceased to miss his brother, but was a candidate for reelection in 1942 and won a third term easily at age seventy.  Senator Bankhead continued his relentless campaign on behalf of cotton and farm interests for the remainder of his career.

John, not forgetting what had happened to his late brother Will, entered the vice presidential sweepstakes at the 1944 Democratic convention when FDR ruthlessly dropped Henry Wallace from the ticket.  Wallace entered the convention with the strong support of Eleanor Roosevelt, but many party bosses, suspicious Franklin Roosevelt’s health was failing, were adamant that Wallace be replaced.  Considering that FDR’s Republican opponent in 1940 had carried Wallace’s home state of Iowa, Roosevelt realized Wallace brought him no political strength in what appeared to be a difficult election.  One of the more unfortunate aspects of Franklin Delano Roosevelt’s character was his inability to be direct, along with a penchant for downright deviousness.  Henry Wallace went to the convention armed with a statement from President Roosevelt saying were he a delegate, he would personally vote for Wallace.  Yet, Roosevelt had also given out a letter saying he would be delighted to run with either Missouri Senator Harry Truman or Justice of the Supreme Court William O. Douglas.  Henry Wallace was hardly the only one who thought he had Roosevelt’s support; a host of potential Vice Presidents of the United States attended that particular convention believing they had FDR’s personal approval to seek the nomination.  John Bankhead, despite being seventy-two years old, wanted the nomination for himself, although he likely derived some satisfaction from helping to deprive Henry Wallace of the vice presidency and ultimately, the Presidency of the United States of America.  Bankhead was in third place in the balloting when he withdrew and threw his support to Harry Truman, who was nominated.  FDR attempted to soothe Henry Wallace’s feelings by making a place for him in the Roosevelt Cabinet.

John Bankhead continued to serve in the Senate until he had a stroke while attending a committee meeting.  Bankhead had been upset by newspaper reports he had profited from speculation in farm and cotton commodities just before suffering a stroke.  Senator Bankhead was taken to Bethesda Naval Hospital, but died two weeks later.  Like his father before him, John H. Bankhead, II had died while in office.

Like his brother Will, John Bankhead was taken home to Alabama and rests beside the other members of his family.