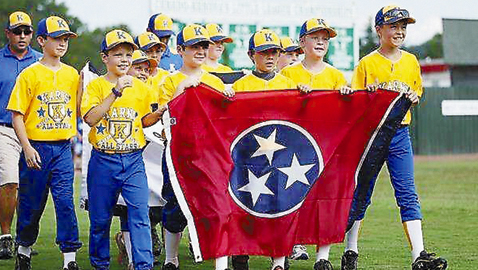 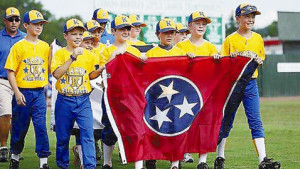 Karns players carry in the Tennessee state flag at the Tournament of State Champions in West Virginia. Karns was this season’s state champion in Little League’s 9 and 10-year-old division.

Representing Tennessee at Ceredo-Kenova, West Virginia in Little League baseball’s 9 and 10-year-old division, Karns also won a lot of admiration from the tournament director and the event’s board members.

“They were very complimentary about the class of our players, coaches and parents shown in the tournament,” said head coach Shane Parks. “They said we were fun to watch and we did it the right way.”

Karns lost its first game in pool play on July 28 by a score of 6-0 to South Carolina, but battled back to earn a berth in final four bracket play and ended up tying for third place in the eight-team tourney field.

Karns got its offense rolling in Game 2 with a 15-5 victory over the North Carolina state champs. In that game, Elias Bohlen, Drew Kregel, Carter Gillette, Austin Sykes and Jonathan Nelson sparkled offensively, while Nelson also notched the mound win.

In one of the tournament’s top games, Virginia pulled out a 6-4 win over Karns in eight innings. Virginia ended the see-saw contest by turning a 6-4-3 double play in the bottom of the eighth when Karns had loaded the bases with one out.

Matthew Campbell came of the bench to go 2-for-2, Conner Hubler smacked a solo homer and Chris Vinson scored two runs to lead the Karns attack against the Virginians. Nolan Parks pitched five innings, staking Karns to a 3-2 lead.

Despite the loss, Karns won the tie-beaker over West Virginia, North Carolina and Georgia to advance to the semifinals. The tie-breaker was based on defensive runs allowed divided by defensive innings played. Karns led the category with 17 runs allowed in 19 innings.

Solid defensive play carried Karns throughout the tourney. In fact, Karns became only the third team to not make an error out of 120 games in the eight-year history of the tourney. Karns actually played two error-free games – in the opener against South Carolina and in its 11-1 semifinal loss to Florida.

In the championship game at legendary Mitch Stadium, Coby Mayo slugged two grand slams in a 13-run second inning to power Florida to a 14-3 win over South Carolina in four innings.

“I left there feeling like our team could play with anybody,” said Coach Parks. “We didn’t play our A game against Florida, and they have a very, very good team.