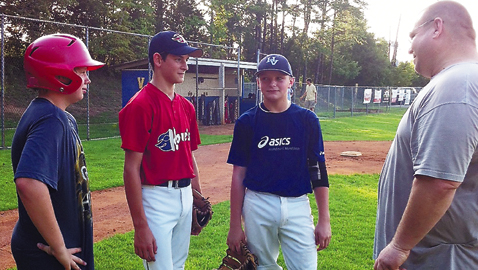 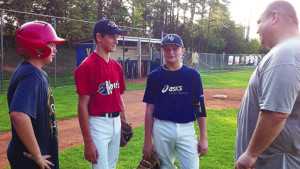 The cards appeared to be stacked against the Karns Blue All-Stars.

A disappointing one-run loss to Maryville on Monday, July 9, had dropped them into the dreaded losers’ bracket of the District 6 Little League (11 and 12-year-old division) baseball tournament at Karns.

Even after eliminating the Karns Gold All-Stars 16-4 and downing Maryville 5-1 to force the “if necessary game,” Karns Blue had its home field advantage taken away by Mother Nature when she dumped so much rain on the Karns field, the championship game had to be moved to Maryville.

But this and that combined with the fact it was Friday the 13th still couldn’t stop Karns from accomplishing its mission. Karns run-ruled its longtime rival 11-1 in four innings to capture the district title and advance to the state tourney, which was scheduled to start this past Saturday in Murfreesboro.

“The team came ready to play,” said Karns Coach Jim Bell. “They responded to the loss and moving the game with everything we could hope for. We had a lot of players step up tough.”

In particular, Bell said Ryan Medders’ home run in the top of the first inning and Ryder Green’s stealing home in the third were huge.

Medders’ two-run shot to straightaway center got his team rolling and was just the start of a big night for the cleanup slugger, who would go on to add a run-scoring double in the third – when he burned the Maryville right fielder – and a three-run homer in a decisive fourth. That added up to three extra base hits and six RBI.

The most unusual and exciting play of the game came from Green’s alert and sneaky base running. Green darted home from third when Maryville pitcher Christian Markham recorded a strikeout but didn’t pay attention to the Karns baserunner.

Green had sized up the pitcher’s tendencies.

“Ryder and (third base) Coach (Jason) Garrett had made eye contact two pitches before,” Bell said. “They both saw it.”

Green’s run made it 4-1. Jordan Tarver had doubled and scored Maryville’s only run off Thomas Saliba in the second.

Maryville tried to rally with two outs in the third. An error followed by a double put runners on second and third. But Saliba’s height paid off when he fielded a high bouncer back to the mound and threw to first to end the threat.

A drizzle of rain began with the fourth inning. Markham, surprisingly, lost his control, plunking two Karns batters and walking the next two to force in a run and make it 5-1. Markham was relieved by lefty Will Orren, who was promptly greeted by Trevor Adams’ two-run single.

Medders got in his second homer, a three-run blast to right center that made it 10-1, just before the rain intensified and play was suspended for 30 minutes.

Following the delay, a two-out single by Anders Cook plated Brock Umberger to give Karns its 10-run lead. That meant Maryville would have to score at least one run for the game to continue. Maryville had the bases loaded with one out, but Tarver was caught trying to steal home and tagged out by Saliba. That was followed by a game-ending ground out to shortstop.

Bell pointed out Saliba’s “change of pace” was a key. His cutter was effective. “Thomas pitched in the loss and stayed with his fastball.”

Both coaches noted the longtime rivalry between the two teams.

“We’ve played them for the district championship every year since they were eight years old,” said Bell. “They have great kids. We knew they’d be tough.

“It’s been a rivalry with good sportsmanship on both teams.”

Said Maryville Coach Bud Markham: “I thought Karns just outplayed us in every aspect of the game. They are a great group of boys. We’ve played them several times.”

This time, Maryville had “one bad inning,” said Markkam, and Karns made them pay.

OTHER ACTION: Karns Blue opened district tourney play with a 21-1 romp past Union County on July 6. Saliba blasted a grand slam and Logan Aeschlimann homered in the victory. Karns Blue beat Grainger County 12-0 in the second round. Cook had a two-run homer, while combining with Adams and Brian Bell for a no-hit shutout. Maryville nipped Karns Blue 4-3 in the winners’ bracket finals as Karns stranded runners on second and third in the last inning.

The Karns Gold All-Stars notched a 12-0 win over New Tazewell in their tourney opener. Andy White set the tone as he hit the game’s first pitch for a home run. Karns Gold couldn’t get past Maryville, however, in the second round, losing 17-9.

Playing in the losers’ bracket, Chris Garrett and Nick Miles each belted a home run in Karns Gold’s 24-2 win over Union County. Karns Gold then ousted Grainger County 8-1 as Josh Melton launched a two-run homer. Jared Culp came into pitch with the bases loaded in the fifth and halted a Grainger rally.