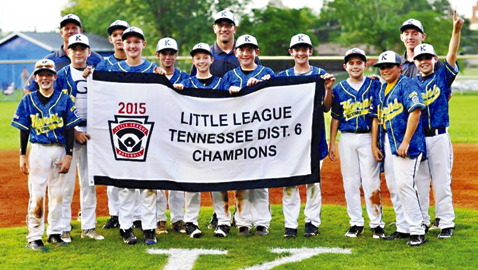 Karns stumbled out of the starting gate in this year’s District 6 Little League tournament, but roared across the finish line.

Karns had dropped a one-run decision to Maryville Red in its first game in the tourney.

“At that point, we knew we had a long road ahead of us,” said Eller. “It was win or go home.

“Our pitchers did a good job of keeping us in games, and our hitting came on.”

The mercy-rule win in the title game earned Karns a berth in the State tournament at Jackson, starting Saturday, July 18.

After Maryville scored an unearned run in the top of the first inning, winning pitcher Johnny Eller’s two-run single to shallow left center put Karns ahead and the home team never looked back.

Leading 7-3 heading into the bottom of the fourth, Karns erupted for six runs and the game was called with one out. A two-run triple by Jordin Vinson followed by Ben Smith’s run-scoring double had pushed the lead to 10.

White, who bats from left side, had a RBI double in the first and scored after a leadoff triple in the third. Adkisson’s shot off the left field fence drove in a run in the second and he had another RBI double in the fourth. He also scored three runs.

Maryville pulled starting pitcher Josh Moore after he walked the leadoff batter in the second. Travis Reeder’s two-run double in the third led the Maryville attack.

“I can’t say we have dominant pitching,” said Coach Eller, “but we have good pitchers, and quite a few of them.

“These kids fought,” he added. “They kept the intensity up. The first game was kind of a wake-up call for us.

“I’m excited about practicing a little (this) week and I hope we can make some noise at the state.”

Eller told his team after the game that advancing to the state is a great opportunity that a lot of other teams don’t have and shouldn’t be taken for granted.

“We’re going to state with purpose to represent Karns and do the best we can. If we can win the whole thing – awesome.”

Karns’ 10 and 11-year-old All-Star teams also won district titles. The 10s were scheduled to begin play at the state in Tullahoma this past Saturday. The 11s’ state tourney starts July 18 in Goodlettsville.