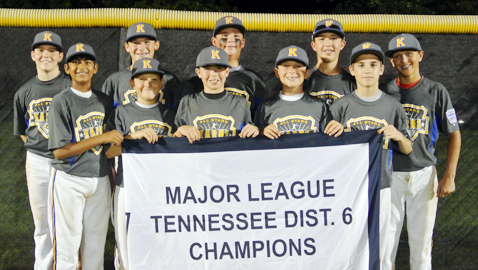 Karns punched its ticket to the Little League State baseball tournament this year in dominating fashion.

“That’s pretty good,” said Head Coach Mike Jenkins. “We’ve got some good hitters, and one not here who might be our best.”

Ryder Green, noted Jenkins, was playing with another team in a tournament at Cooperstown, N.Y., home of the Baseball Hall of Fame. He’s also Karns’ No. 1 pitcher and throws in the 70s, said Jenkins. “He pitched a one-hitter in our first game (15-0 win over Maryville on July 8) and hit a grand slam.”

Karns will have Green back for the Little League State tourney, which was scheduled to start this past Saturday, July 20, at Winchester.

Cam Fisher paced Karns with a 3-for-4 effort in the district finals. Five others had two hits apiece, including Gent, who had his second two-run double, a chopper down the third baseline, as Karns pulled out to an 8-0 lead the third inning.

Catcher Matthew Fine, nicknamed “Panda,” doubled in Gent for Karns’ first run in the top of the first, and his grounder to third plated Jacob Tate with the champs’ final run in the fifth as the mercy rule limit was reached.

Fine, Tate, Tyler Myers and Mason Patel also had two hits each in the one-sided affair.

All three Maryville batters grounded out to Tate, Karns’ first baseman, in the bottom of the first inning – a rare occurrence. Gent struck out the side in the second.

Maryville, traditionally a tough for Karns’ All-Star teams, put its first runner on base when its No. 9 batter drew a two-out walk in the third.

Seth Orren bounced a single up the middle to lead off the Maryville fourth, ending Gent’s no-hit bid. Orren tried to advance to second on a pickoff attempt, but rightfielder Patel’s throw to shortstop Meyers cut him down.

Maryville tried to at least spoil Gent’s shutout in the fifth when leadoff batter Christian Keller got aboard on a throwing error. Keller moved to second on a passed ball and to third on a single by Bo Price but was stranded there when Gent fanned Takumi Nade to end the game.

Karns, which crushed Grainger 28-0 in the district semifinals July 11, was scheduled to play South Nashville in the opening round of the State tournament.

“We’ve got a good shot,” said Jenkins of his team’s chances at the State. “This is the best team we’ve had going forward.”

Jenkins’ teams have progressed at the state level each of the past three years, placing fourth as 8-year-olds, third as 10’s and second last year as 11’s.

South Nashville defeated Goodlettsville to win District 7. Last year, Goodlettsville advanced to the Little League World Series in Williamsport, Pa., and won the USA title before bowing to Japan in the finals.

Karns remains the only program in Knox County that is affiliated with Little League. Its World Series is nationally televised each summer.

In the USA title game last year against California, Goodlettsville squandered a 15-5 lead in the sixth inning before pulling away to a 24-16 win in the seventh. They lost to Japan 12-2 in the finals.

Goodlettsville joined Little League in 2010 and played in the State tournament at Karns in 2011.

KARNS CELEBRATED the district title with a late night game pitting the players against parents, coaches and board members. “That’s been a tradition after winning the district,” said Coach Jenkins, whose teams have now won the district four years in a row.

The game is played on the Little League field with a tennis ball and using “wiffle ball” rules, which means you can throw it at ‘em to get ‘em out.

“We played until 4 or 5 in the morning one year,” said Jenkins.

KARNS’ 11-year-old All-Star team was in the “Final Four” heading into its State tournament Friday night (July 19) action at Charlotte in Dickson County. Coach Shane Parks’ team had defeated Madison Central of the Memphis area 12-1, lost to Goodlettsville 6-4 and beat Clarksville Northwest 19-1 before its game against Tullahoma on Thursday was rained out.