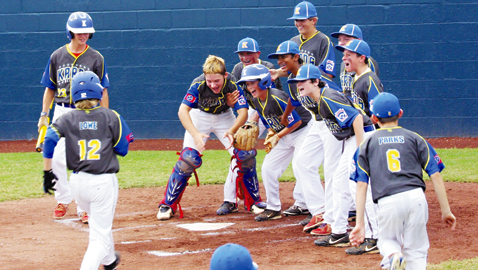 PHOTO BY CAROLYN GRENKOSKI
Jubilant Karns teammates await for Mikey Lowe to touch home plate after he hit smacked a grand slam home run in a 15-5 win over Tullahoma in the State Little League tournament at Clarksville Thursday night.

After three straight one-sided wins, Karns steamrolled into a showdown with defending champion South Nashville Wednesday night and got flattened 9-3.

Karns bounced back in the double-elimination event with a 15-5 win over Tullahoma in Thursday night’s losers bracket finals. That gave the District 6 champs from Knox County another shot at South Nashville in Friday night’s finals at Griff Schmittou Field in Clarksville,

Karns would have to beat South Nashville Friday night and again Saturday night to win the state title and qualify for the Southeast Region tournament, which starts Saturday, August 2, in Warner Robins, Ga. (Those results were not known at press time).

“I feel like we’re ready,” said Karns Coach Shane Parks after an early Friday afternoon practice session. “The kids are focused and have regrouped. They handled the adversity well.

“We had two good practices in two days (since the loss).”

Parks said his team learned it needed “to be more aggressive offensively” from the first game against South Nashville. “We had 10 strikeouts and six were looking.”

A Thursday practice paid off as Karns scored seven runs in the top of the first inning against Tullahoma. The game was stopped after four innings because of the 10-run mercy rule. Home runs by Lukas Cook and Brad Grenkoski highlighted the fast start.

Grenkoski hit another homer in the fourth and finished the game 3-for-3 with four RBI. John Beam got the win on the mound. Cook and Lowe did a good job in relief.

Coach Parks said his team was “overconfident” coming into the first meeting with South Nashville, which erupted for eight runs in the fourth inning to erase a 2-1 Karns lead.

“We had only seen average pitching up until that point and so our timing was off for the better pitching,” said Parks.

“South Nashville did a good job at the plate and had the discipline to get the pitch count up on our starter (Zane Keener). When he came out we seemed to lose confidence, and from that point on all the little things seemed to go their way. The eight-run inning seemed to deflate us and we just never could get anything going offensively.

“We went out Thursday morning and regrouped with a two-hour practice. From this point forward, we told the boys, ‘It’s all about the process, one inning at a time.’ “

Karns, which had not been scored on in its first three games in the state, had taken a 2-0 lead against South Nashville in the top of the third when Logan Harbin and Lowe opened the inning with back-to-back homers.

“We opened up our first round game red hot,” said Coach Parks after a 21-0 victory over Johnson City National on Saturday, July 19.

Cameron Fisher and Jonathan Nelson both homered in the first inning to provide a 5-0 lead. Keener allowed only one base runner, while striking out three. Karns finished with nine home runs. Fisher led the way with three and Nelson had a pair. Mason Patel closed out the game to complete the no-hit shutout.

Karns blasted Obion County 26-0 Monday night, July 21, for its third win in the state. Karns pitchers combined for another no-hitter. Grenkoski got the mound win and Baker Whitfield took care of the relief duty. Karns had seven homers, with Fisher and Nelson blasting two each.