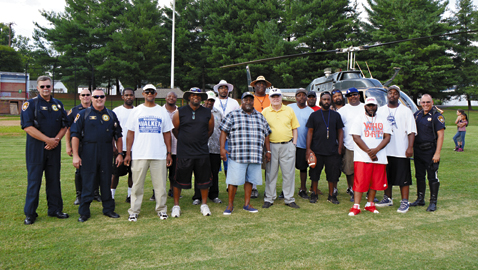 Photo by Dan Andrews.
Members of the Austin-East Baby Roadrunners Board and the Knox County Sheriff’s Department join forces to run a football camp that kicks off the 2014 season for the Baby Roadrunners. The sheriff’s department has been involved for a decade.

The Austin-East Baby Roadrunners kicked their 2014 season off with a football camp last week.

The camp was a three-day event and was put on with the help of the Knox County Sheriff’s Department. The camp is an annual event and the sheriff’s department has been involved for the last decade.

“It’s really special to have them involved,” Baby Roadrunners Commissioner Melvin Tate said. “They help us to kick off our season and get the kids over here after baseball season is over.

“They do a lot to help us in any way they can. They will get me helmets if I need them. They do everything they can to get me what I need and they’ve been involved with us for 10 or 11 years.”

The three-day camp consists of football drills with the organization’s coaches and the Knox County Sheriff’s Department provides fruit and Gatorade for the camp’s participants.

The event concluded with a picnic for the players, coaches and parents Thursday night.

“They have a picnic every year and we invite everybody,” Tate said. “We invite the mamas and the daddies and whoever happens to be there. And they all have a blast.”

The sheriff department’s chopper was present on the final night.