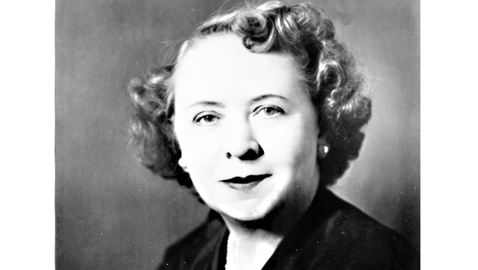 One of the lesser-known political dynasties in the country was birthed in the hollows and coal fields of West Virginia.  The Kee family dominated the politics of Bluefield, West Virginia and father, mother, and son represented the Fifth Congressional district for a total of forty years.  John, Elizabeth, and James Kee served in Congress from 1933 until 1973.

Elizabeth Kee was certainly not averse to change; in fact, she possessed something of a contrary streak from childhood, according to her sister Hazel.  The future Congresswoman changed her own first name from Maude to Elizabeth and having been raised in a family of Baptist Republicans, Mrs. Kee became a Catholic and a Democrat.

Elizabeth had married a railroad clerk, who barely acknowledged the marriage or the children produced by their union.  Elizabeth had trained to be a court reporter and became rather successful at it.  Her former husband had been represented during their divorce by one of the more prominent lawyers in Bluefield, John Kee.  A bachelor for his entire life, Kee was smitten by the spunky divorcee and proposed marriage when he was fifty years old.

In 1932, John Kee, a former State Senator, challenged Republican Congressman Hugh Ike Shott, who was seeking reelection.  West Virginia had once been a reliably Republican state, but with the advent of the Great Depression and the candidacy of Franklin Delano Roosevelt, West Virginians gave their support to the Democrats.  Kee beat Congressman Shott and the entire Congressional delegation, save for Senator Henry Hatfield, were Democrats.

Congressman Kee began a practice every member of his family would follow, hiring a close family member as a top secretary or administrative assistant.  Kee employed Elizabeth as his secretary and she dealt with most of the correspondence coming from the district, as well as constituent matters.

John Kee was easily reelected every two years following 1932 and he rose in seniority until he became Chairman of the House Foreign Affairs Committee.  Kee had already had one heart attack and in 1951 the seventy-six year old Congressman collapsed during a committee meeting and died.

There was a scramble amongst a host of local politicians to succeed Kee and the nomination was to be made by a committee for a special election.  Originally, Mrs. Kee was not a candidate and there was discussion that she would be retained by whomever won the nomination to continue to serve as the next Congressman’s secretary, a notion that she loathed.

Much of West Virginia’s Democratic Party politics was dominated by senior United States Senator Matthew Mansfield Neely and the United Mine Workers organization and the UMW was supporting another candidates besides Mrs. Kee.  Elizabeth Kee’s son, James, quietly lobbied for his mother, pointing out nobody knew the district better nor was any particular candidate better positioned to keep up the late Congressman’s work.  The UMW had been backing a local state legislator as the nominee for the special election, but dropped him in favor of Mrs. Kee, who was named as the Democratic candidate.

The Republicans made an effort to win the special election, choosing a local lawyer, Cyrus Gaddus, as their candidate.  Gaddus promptly attacked Mrs. Kee and tried to portray her as being too close to oil interests, a serious charge in a district where much of the local economy depended upon coal.  The Kee campaign fought back, pointing to the fact much of Gaddus’s financing was provided by oil interests.  Mrs. Kee won fifty-eight percent of the vote in the special election to succeed her late husband.

Congresswoman Kee had only intended to serve out the remainder of her husband’s term and once again numerous prospective candidates came forward to run for Congress.  Mrs. Kee soon reversed herself and announced she would be a candidate in the regular 1952 election.  Congresswoman Kee was once again opposed by Cyrus Gaddus in the general election, but she defeated him by an even greater margin and she was never again seriously challenged until her retirement in 1964.

Mrs. Kee had written an entertaining little column, which appeared in numerous daily and weekly newspapers throughout the Fifth District during her husband’s Congressional career; she continued the practice during her own time in Congress, calling it “Keenotes”.

Like her husband before her, Mrs. Kee hired a close relative as her administrative assistant; she employed her son, James, as her top aide.

In 1955, Congresswoman Kee had been selected as West Virginia’s “Daughter of the Year” and several of her colleagues rose in the House to praise her service, including then-Congressman Robert C. Byrd.

Mrs. Kee proved to be highly sensitive to the needs of her constituents and worked particularly hard for veterans.  The longer she stayed in Congress, the more skeptical she became of appropriations for foreign countries, money she believed could be better spent in America.  Congresswoman Kee once compared the money given by the United States to countries ravaged during World War II to that during the decade of the 1950s, which she felt was merely spent for political purposes.  As many of her constituents lost jobs in the coal fields due to foreign oil, Mrs. Kee redoubled her efforts to be helpful.

Mrs. Kee, for a time, had suspended her regular column when her husband had assumed the chairmanship of the House Foreign Affairs Committee.  Her workload had reached the point where it was difficult for her to find the time to write the column, especially as John Kee’s health began to fail.  Once elected in her own right, Mrs. Kee resumed her column and the topics ranged from her observing a nuclear blast with other members to sassafras tea.

Congresswoman Kee used her column to chastise Republican President Dwight D. Eisenhower whenever she believed the highly popular chief executive needed or deserved it.  Eisenhower was a venerated figure and many members of Congress were reluctant to criticize the president directly.  Mrs. Kee had no such inhibitions and flatly blamed the president for the recession in 1958, which hit the State of West Virginia particularly hard.  The Republicans lost two Senate seats that same year in the Mountain State.

Mrs. Kee had strongly supported a food stamp program for indigent and needy families and was horrified when Eisenhower’s Secretary of Agriculture, Ezra Taft Benson, refused to implement the program.  Unfortunately, Congress had passed the program allowing it to be implemented at the discretion of the Secretary.  Mrs. Kee pointed out there were many families in West Virginia facing starvation without the food stamp program.

Elizabeth Kee’s personal life appeared to be happy, although she never remarried following the death of her second husband.  She had a Chihuahua, to which she was devoted.  Mrs. Kee also loved listening to music and adored flowers.

In 1964, Mrs. Kee announced she would not seek reelection to Congress.  Her son and administrative assistant, James, ran to succeed her and won.  Keeping up the family tradition of nepotism, Jim Kee promptly hired his daughter Kirsten as his own administrative assistant.  Kirsten Kee served throughout her father’s time in Congress, 1965-73.

Jim Kee did not manage to survive politically as long as either of his parents; in 1972 West Virginia lost a Congressional seat through redistricting.  Kee’s district was combined with that of Congressman Ken Hechler.  Hechler, a former aide to President Harry Truman, educator and best-selling author, was loathed by much of the Democratic machine in West Virginia and they conspired through redistricting to eliminate him from Congress.

Although the new Fourth district contained sixty-five percent of Jim Kee’s old Congressional district, he lost the Democratic primary badly.  Hechler would remain in Congress until 1976 when he made a quixotic bid for the Democratic gubernatorial nomination, losing to John D. “Jay” Rockefeller IV.  Hechler proved to be an especially resilient politician and reemerged some years later and served as West Virginia’s Secretary of State, being reelected three times.  Ken Hechler tried hard to get back to Congress, but was unsuccessful in each of his efforts.

A remarkable and interesting character, Ken Hechler will be ninety-nine years old this September.

Congressman James Kee was bitter about his defeat and made the decision to destroy the personal and political papers of his father and mother, along with his own.  That decision deprives historians a full and complete record of a political dynasty that was successful for four decades.

Kirsten Kee, first hired as her father’s administrative assistant when she was only twenty-four years old, died in 2012 following complications from a stroke.

Most political dynasties run their course and James did not achieve either the success or notoriety enjoyed by his parents.  Although little remembered today and dismissed by some as merely another Congressional widow lucky enough to follow her late husband into office, Elizabeth Kee was a hard working and productive member of Congress, especially in light of her efforts on behalf of her constituents.