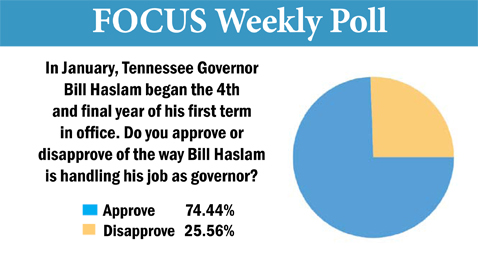 This week’s Knoxville Focus poll, asked the question: “In January, Tennessee Governor Bill Haslam began the fourth and final year of his first term in office.  Do you approve or disapprove of the way Bill Haslam is handling his job as governor?”

Almost 75% of respondents say they approve the way Haslam is doing his job.

The highest approval for Haslam’s performance in office comes from the Ninth District, which is South Knoxville.  79.19% of likely voters say they approve of the job Haslam is doing.  Voters in the Third District, which comprises much of West and Northwest Knoxville inside the City of Knoxville, were just a fraction behind in their approval of the governor’s term of office.