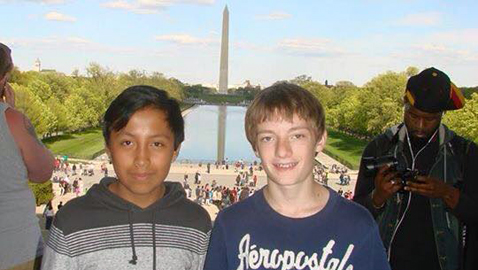 When South Knoxville resident Victoria DeFreese had the opportunity to attend the Computers in Libraries 2015 Conference in Washington DC last week, she jumped at the chance. And when she decided to take along her 13 year old son James and his best friend Rio, both honors students at South Doyle Middle School, Rio’s parents Leslie Kurtz and Bart Bartram jumped at the chance.

This was a perfect opportunity for these two 7th grade honors students to visit the Nation’s capital. The fact that the trip happened to coincide with TCAP week was also perfect, as the families of both boys made a decision at the beginning of the year that their children would not participate in what they view as inappropriate high-stakes testing.

In spite of the fact that just a few weeks ago, the TN DOE legal counsel sent an intimidating letter to all the Director of Schools stating that parents do not have the right to opt their child out or refuse the high stakes tests mandated by the department.

DeFreese said, “Fear, uncertainty, doubt …a time old tactic to persuade people to comply. This letter is just a legal opinion, not the letter of the law. I will exercise my constitutional right to direct my child’s education with an educational field trip to Washington DC over a week of filling in bubbles in school.”

She added “I will see to it that my child and one of his best friends have a great education at our Nation’s capital. It is my right. I AM THE MOM! I am the law…. over my children until they are 18.”

The trio headed to Washington DC via the Megabus.  U.S. Congressman Jimmy Duncan’s office arranged numerous activities for the group, including a tour of the Library of Congress, US Capitol Building, and the White House.

They stayed in an apartment in a “quaint neighborhood next to a park in Capital Hill District in Washington” – an economical find on Air BnB. It was an easy walk from Eastern Market, which they frequented daily. Upon arriving in DC, they learned that Congressman Duncan’s office had also arranged a tour of the Bureau of Engraving and Printing.

On Monday they toured the Library of Congress, and the Capitol. They finished the day at the National Gallery of Art, National Archives, and the grocery store (13 year old boys get hungry). Rio said, “We got to see some important documents that helped form our country:  the Declaration of Independence, the Bill of Rights, and the Constitution. This has been better than going to school!”

He told his Mom, “We walked 20 miles today!” DeFreese said, “The boys and I have navigated it pretty well…. the only blood drawn was from a 13-year-old dragging his hand along a metal post chaining off the Korean War Memorial. But Band-aids and Neosporin were available at a nearby CVS.”

Tuesday was the Computers in Libraries 2015 Conference at the Hilton Washington in DuPont Circle. After DeFreese participated in the panel discussion on Engaging Communities with Social Media, the group visited the Smithsonian Natural History Museum. They took a quick walk back to the apartment for sandwiches, then rode the metro from Eastern Market to Foggy Bottoms. They walked from Georgetown U toward the Watergate Building, past Georgetown Harbor and then back to DuPont Circle and rode the Metro back to Eastern Market.

DeFreese said, “We have covered a lot of DC already – but will not be able to see it all on this trip. However I have tried to make certain these boys have a great educational trip. They should remember this experience forever – and I hope fondly – after their legs quit hurting and they go home and catch up on sleep.”

Wednesday’s destinations included the Smithsonian Air and Space Museum in the morning, the Bureau of Engraving and Printing (BEP) in afternoon.

Thursday started bright and early with the White House tour arranged by Congressman Duncan’s office. But, when they arrived they were told in addition to their tour confirmation, they needed to have a blue card or have their congressman with them. DeFreese called Congressman Duncan’s office, and he answered the phone, apologizing for the tightened security. He told them to come by his office, where they obtained the blue card. Duncan’s chief of staff drove them back to the White House in the congressman’s personal car.

They got past the first security guard, but Rio’s name wasn’t on the list. They were detained for 15 minutes more while Secret Service did a full background check. James said, “If Rio can’t get in, I’m not going either.” They were finally cleared to go on the tour.

Next they headed to Union Station for a Big Bus tour to take in city sights and anything they had missed so far, such as Jefferson Memorial. Embassy Row and National Cathedral were also on the agenda for Thursday. That evening they boarded the Megabus for the overnight ride home.

James said he enjoyed the Bureau of Engraving and Printing, where they saw paper currency  totaling in the millions, and the Lincoln memorial. He was also impressed with the display of the Constitution at the National Archives.  Rio liked the Arlington Changing of the Guard, Smithsonian Museum of Natural History, and the Van Gogh paintings at the art museum. He also thought the secret service guys were “cool.”

DeFreese adds, “These boys are honor students who have learned much on this trip – it truly is an opportunity of a lifetime. Even though our children will be docked on absences and receive a “0” for 15% of their semester grade in every class, it was still a no brainer choice for 7th graders to engage their life experience with an educational experience. It does come with penalties, but it is totally worth it!”