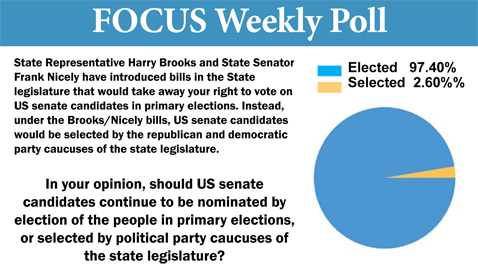 State Senator Frank Niceley and State Representative Harry Brooks are sponsoring a bill (House Bill 415) to allow the Republican and Democratic caucuses in Nashville to select the nominees for the United States Senate.  This week’s Knoxville Focus queried voters whether they preferred to choose nominees in primary elections or allow the legislature to choose the nominees.

An astounding 97.40% say they want to be able to vote to select United States Senators.  Only 2.60% of Knox County voters supported the notion of allowing state legislators to select nominees for the U. S. Senate.

“I was surprised by the margin,” said Steve Hunley, publisher of the Knoxville Focus.  “I would have guessed most people in Knox County were against it, but I never imagined it would be so lopsided.”

Niceley no longer represents Knox County as he did while a member of the House of Representatives, but those areas currently represented in the House by Harry Brooks were solidly against the idea of the legislature selecting the nominees for the United States Senate.