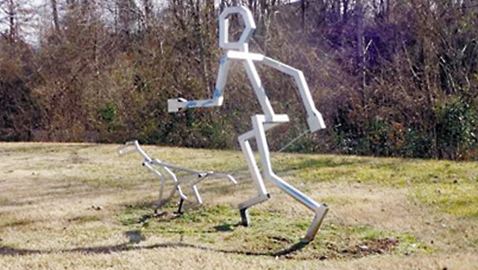 Photo by Mike Steely.
Along the Third Creek Greenway you might chance across this sculpture. The greenway sees lots of dog walkings, bikers, runners, and people enjoying a strip of nature in the city.

Here and there around our county are places where you’ll find curious things, places and some things that simply are interesting and odd.

You can travel from one end to the other, north, south, east and west and run across places that bring a smile or a question. Some things are man-made and others are unique oddities of nature. You never know what you’ll find as you venture through the neighborhoods and communities of our area.

Take Corryton, for instance, way up on the north part of Knox County along Emory Road between Tazewell and Washington Pikes. It’s a nice community that is more “country” than it is “subdivision” and has a small area that could be called a “downtown.”

Corryton also boasts a train depot. Or does it?

The “depot” is near the original location of the long-gone railroad station. The Community Club built a library a bit further from the original site and decided to build it to look like a railroad passenger terminal. The depot-looking library is reminiscent of the passenger stations that once dotted our county in places like Concord, Heiskell, and Mascot. If you drive up to Haskell and look hard enough along Depot Street, you’ll find the platform where that community’s old train station sat.

Also in North Knox County, along Emory Road near that historic old route’s intersection with Rutledge Pike, is a home with a unique feature in its side yard. Just driving by you’d think there was an old drive-in theater there, but it is actually the huge old Drive-In sign relocated there from an abandoned theater. Someone decided to preserve the sign and it is a delight to see that old sign there.

Just down the 3rd Creek Greenway from Bearden, heading toward downtown, there’s a sculpture that catches your eye. There are lots to see on that 4.5 mile greenway including some of most rural walkways inside the city. Near the UT RecSports Complex along the route is a metal sculpture of someone walking their dog. It is striking and whimsical and memorable.

It may be one of the oldest cemeteries in our area and is the burial place of the victims of the Cavet family who took shelter there while under an attack by the Chickamauga Cherokee. There’s an old historic marker there recalling the massacre.

The family of settler Alexander Cavet was attacked there by Cherokee led by Chiefs Doublehead and Watts when the raiding party turned away from attacking the federal garrison downtown. When Watts and others convinced the family to surrender with a promise of safety, Doublehead instead killed every member.

The cemetery is located on Broome Road east of North Gallaher Road. A subdivision just south of the old burial ground has the appropriate streets: Doublehead Lane and Alexander Cavet Drive. The Cavet Station Greenway runs along Gallaher but doesn’t pass by or through the cemetery.

On the grounds of the Knox County Sheriff’s Department and Jail and the Three Ridges Golf Course are the graves of former residents of the Maloneyville Poor Farm. Records from 1910 indicate that there were at least 102 people living there. Most Tennessee Counties had “poor farms” where destitute citizens were housed and worked. Often these poor people were leased out to local farms and households to work.

Just north of the Village of Concord is a large brick building and cemetery originally the home of the Cumberland Presbyterian Church. Over the years the building, erected about 1870, was used as a school and now as the home of Choto Masonic Lodge #253.

It is a striking building surrounded by early graves and a historic marker out front.

Cedar Lane runs from Central Avenue Pike to Broadway in Fountain City. Actually Merchants Drive becomes Cedar Lane there. It is one of the main corridors between I-75 and Fountain City. It winds through the Inskip Neighborhood and has recently been chosen for a sidewalk from the east portion to Haynes-Sterchi Road.

But why is it called Cedar Lane?

Many years ago much of the roadway passed through a farm owned by James McMillan. He planted red cedars along both sides of the farm road about 1844. A few of those original cedars are still alive and, in 1994, the Dogwood Arts Festival cited the trees as the finest example of old cedars in the county.

You can see some of the original trees in front of St. Joseph’s School.

There are many, many unusual or unexpected places around Knoxville and Knox County. A drive or walk around any neighborhood brings pleasant surprises. Getting out and exploring the area beyond your own neighborhood is an adventure, especially during the cold winter months.