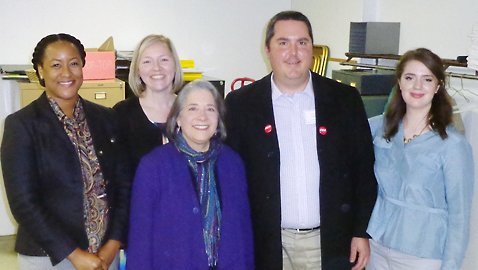 Knox County Democrats met last week and elected officers and district representatives. The Communication Workers of America’s local office at 1415 Elm Street saw more than 163 delegates from across the county in attendance, along with elected party officials and guests.

Cameron Brooks, who was serving as vice chair, was promoted as chair by outgoing Chair Linda Haney.

Brooks is a former Knox County Election Commissioner and was the campaign manager for Leland Price and Cheri Siler in last year’s election,.

Cameron headed a “Unity Team” that campaigned prior to last week’s convention and all members of his team were elected without opposition.

Jackie Clay was chosen as vice chair. She is a program manager for the City of Knoxville and served as Volunteer Coordinator for the election of Mayor Madeline Rogero. She replaces Brooks in that position.

Shannon Webb was selected as treasurer. She is the Director of Marketing Support for Edfinancial Services. Webb is replacing Sylvia Woods, who has been serving as a temporary treasurer.

Emily Gregg was re-elected as secretary. The UT student served as GOTV coordinator last year and is a member of the Knox County Young Democrats.

Cameron and his ticket are promising to find Democrats to become candidates in all offices in 2016, to raise funds, to hire a full-time field organizer, to train candidates and to increase volunteers.

“I want to bring my ten years of organization efforts with the Communication Workers of America and other organizations to this effort. It’s an important struggle,” Brooks told the delegates. He added that the Democratic Party locally must strengthen its ties with labor and community organizations.

Chairman-elect Cameron Brooks told The Knoxville Focus he intends to aggressively recruit for offices in 2016 so voters will have some options.

“We need good, qualified Democratic candidates, whether they be for county commission or state house seats,” he told The Focus, adding, “We will work hard to fundraise so we can accomplish these goals.”

“We have to court new voters and let them know we exist as a party and stand for their issues,” he said.

Brooks said that the presumptive Democratic Presidential candidate, Hillary Clinton, is enormously popular with the base and would be a very attractive general election candidate.

“I see her as bringing new voters to the polls, which will help us in our races,” he said

The Focus asked the new chairman about the 2nd District county commission seat currently held by Democrat Amy Broyles, who is term-limited next year. He said, “We will use all available resources to hold onto that seat. Commissioner Broyles has done an outstanding job and is the perfect example of good governance that Democrats bring.”

Asked about outgoing Chairperson Linda Haney, Brooks said she “is a tireless advocate and worker for our party. She has given tremendously of herself and her leadership held together our party during some very rough times. Democrats owe her a debt of gratitude for her service.”