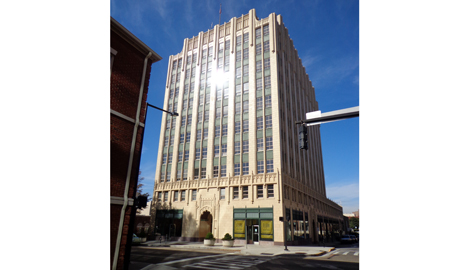 Recently Knox Heritage members, local officials and supporters met at the Bijou Theater to honor local citizens for their efforts in preserving our past in its annual gala. It was fitting the assembly was held at the Bijou because, back in 1974, the heritage group was formed in order to save the old theater.

While the preservation group issues a list of the “Fragile Fifteen” properties each year, that night they gathered to honor the “Fantastic Fifteen.”

Among the properties and people honored was the Medical Arts Building and the people and companies involved in the restoration and renovation of the building.

The Medical Arts Building was built by contractor Earl Worsham and Dr. M. M. Copenhaver. The building was lost during the depression and taken over by the Metropolitan Life Insurance Company. Originally planned for 13 stories, only 10 stories were built because of the available funding during the economic  hit in 1929. It featured, and still does, a parking garage.

Once fully restored, the beautiful building began leasing luxury apartments in April of this year. The renovation includes the interior, the garage and a state of the art security system. Every rental unit boasts views of the downtown skyline, the Tennessee River, the Smoky Mountains and Neyland Stadium.

The Heritage group also honored the Johnson Family/McCarty Holsaple McCarty for preservation and rehabilitation of Tailor Lofts at 230 South Gay and Mountain View Restoration LLC for renovation and restoration of the Anderson Project at 223 East Anderson Street.

The Hops and Hollers Craft Beer Store and Taproom, at 937 North Central Street, was honored for the efforts of Knoxville Preservation & Development, LLC and Todd Wakefield, owner.

Hops and Hollers is a 1200-square foot restored building and Wakefield said no city funds were used in the renovation, adding that he “loves the area.”

Wakefield told The Focus that they’ve been open since April and are doing “fantastic.” The taproom offers 32 types of craft draft beer and 100 different craft beers in cans and bottles. He said 16 of the craft beers are from Tennessee and the others are regional or national. Carry-out beer is also available. In a unique twist, Wakefield said that food trucks serve the facility, one staying there on Monday for lunch and dinner and the others coming there the other days of the week.

The Heritage group also selected Tailor Lofts, at 430 South Gay Street, as part of its “Fabulous Fifteen.” The renovated building, which still carries the name of Dale Slomski’s tailor shop high on one side of the structure, was built about 1876 and survived a fire that took out many of the surrounding buildings during its early years. Honored were the owners, The Johnson Family and MaCarty Holsaple McCarty.

The Johnson family introduced Arby’s Restaurants to Knoxville and the building is now owned by the family and the historic building was known locally as the “Arby’s Building.” Downstairs at street level is the new Five Bar restaurant. The building features 9 residential units with lofted units and hardwood floors. The renovation of the building, one of the oldest on Gay Street, was estimated at $2.5 million.

Jack Neely was chosen as the Preservationist of the Year; Brian Pittman was selected for the Spirit of Kristopher Award; Rick Blackburn was “Volunteer of the Year;” and The Old Gray Cemetery was given the Greystone Award.