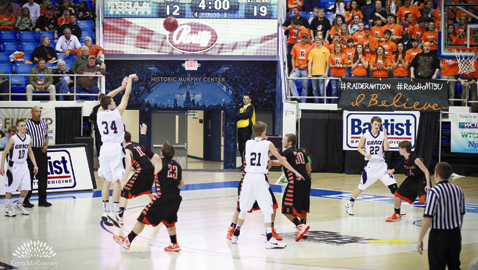 Photo by Kara Mckamey
Grace Christian Academy’s Andrew Byram (34) fires up a shot against Richland midway through the second period in the Class A quarterfinal game at the TSSAA state high school basketball tournament in Murfreesboro. Other Rams in the photo are Tanner Hill (10), Trey Stewart (21) and Kobe Kelley (22). Richland held off Grace for a 54-46 win.

Knoxville’s three representatives at the TSSAA state boys basketball tournament last week couldn’t make it out of the quarterfinal round.

Grace Christian Academy, looking for its first ever Class A state tourney victory, was eliminated by Richland 54-46 after making a strong comeback at MTSU’s Murphy Center in Murfreesboro.

Gibbs, which had made an incredible tourney run to reach the state tourney for the first time in 26 years, had a cold shooting performance and bowed to Livingston Academy 76-50 in Class AA.

State tourney regular Fulton, in the state tourney for the 20th time, couldn’t generate enough offense and fell to Jackson South Side 53-39 in another Class AA contest.

Two other Knoxville-area teams, Oak Ridge and Maryville, also were ousted in Class AAA quarterfinal action. Only Wartburg, a Class A team, survived and advanced to Friday’s semifinals.

Grace (23-11) fell behind 9-0 in the opening three minutes and made only one basket in the first period. Rams Coach Matt Mercer felt his team’s sub-par offensive play affected his team’s defensive performance.

“Their two interior guys played very well, but we had too many defensive breakdowns in the first half,” said Mercer. “I think we were a step behind. The two (offense and defense) go hand in hand. We weren’t putting the ball in the basket and it affected our defense.”

Grace shot 29 percent from the field in the first half, while Richland (29-6) made 48 percent of its field goal attempts to lead by 13-5 after the first period and 30-20 at halftime.

Richland increased its lead to 14 (38-24) midway through the third period, but back-to-back 3-point shots by Caleb Walker and Luke Shepherd cut the deficit to eight.

“Our pressing defense got us back in it,” said Mercer. “We forced 24 turnovers.”

But Richland’s Cody Jordan answered by sinking five of six free throws and the Rams failed to connect on their final four field goal attempts.

“It was frustrating – I felt we had chance to win – but I also was happy to be there (at state),” said Mercer. “We didn’t have enough offensive firepower to win it.

“I was proud of our guys for fighting hard … we just shot so poorly in that arena, which sometimes happens to teams.”

Shepherd, a sophomore standout, led Grace with 15 points and had five of the Rams’ 13 steals. Matt Holland contributed 12 points.

First-year Gibbs coach Timmy Meade said Livingston Academy’s inside and outside offensive attack was just too much for his Eagles (25-9).

“We couldn’t guard everything,” said Meade “We had to give something up. They were tough with that combo.”

Aaron Corum led Gibbs with 18 points but hit only 1 of 7 behind the 3-point line. Jay Cade chipped in 15 points.

Gibbs had made a lot of comebacks this season.

“If you keep getting down, it’s going to catch up with you sooner or later,” said Coach Meade. “Today we got in too big of a hole to get out of. They were a better team than we were today.. Got to give them credit. They made plays and we didn’t.”

Meade said Gibbs has been a better shooting team than it showed. He also said he didn’t know if playing in a dome was a factor. “We didn’t shoot the ball well. Credit their defense as well. They contested shots and made it hard on us.”

The loss at the state won’t spoil the Eagles’ banner year, Meade said.

“It hurts everybody now,” he said, “but in a couple of weeks, I think we’ll look back on this and really be proud of the run we had this year. Being a first year head coach, I couldn’t be any prouder of this group of seniors. It’s a special group. They made my transition to head coach easy.”

Veteran Fulton coach Jody Wright expected his team to have its hands full against Jackson South Side (28-3).

“They were ranked No. 1 or No. 2 in the state throughout the season,” said Wright the night before its state opener. “They are big and long and the most athletic team we’ve played all year long. They are well deserving of their state ranking. And they have a Mr. Basketball finalist in A.J. Merriweather.”

Jackson South Side jumped out to a 12-6 lead after one period and steadily pulled away. The Falcons (24-9) got as close as eight points (39-31) in the fourth period, but eight straight free throws by Jaylen Barford extended the margin again. Merriweather’s dunk with 1:23 left was the exclamation point on the decision.

Kelvin Jackson came off the bench to lead Fulton with 17 points and six rebounds in 21 minutes of playing time. Blake Golden added 12 points and six boards.