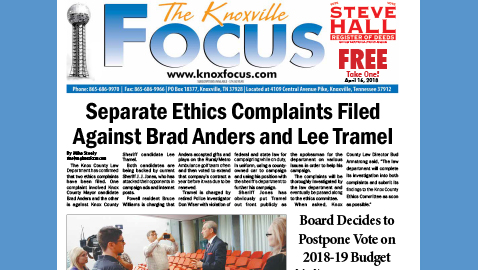 There was pandemonium at a recent meeting of the Knox County Board of Education. Last week, the board met in both work and regular sessions to discuss the budget proposed by Superintendent Bob Thomas. Thomas and the board are facing a $3.5 million shortfall. Having little choice but to recommend cuts, Thomas proposed cutting back spending on magnet schools and Project GRAD. That recommendation brought out a crowd from Knoxville’s inner city and no fewer than eighty-seven peopled signed up to speak at the board public forum last Monday night. The board patiently listened to everyone for 7 ½ hours, remaining in session until 12:30 a.m.

The school system, like every other department and agency of government, must send over a budget for the inspection of Knox County Mayor Tim Burchett and the County Commission. Much of the shortfall has to do with two things: habitual overspending by the school system and increased costs for employee insurance and funding teachers’ pensions.

Board member Gloria Deathridge, who routinely supported overspending the school system’s budget during the reign of former superintendent Jim McIntyre, was the first to cry the Board could not be held responsible for the shortfall. After all, who could have foreseen the cost of insurance premiums rising and increased pension payments for teachers? Deathridge quickly took the position as the board could not have possibly anticipated such fateful events so the county commission should be asked by the board to just provide more money. Deathridge seemed not to realize the board having to cross the street from the Andrew Johnson Building to the City -County Building was a tacit admission the board cannot manage its own budget.

Unfortunately, the county commissioners are acutely aware of the continual overspending by the school system during McIntyre’s administration. Estimates range to as much as $60 million in overspending during McIntyre’s administration. One thing is certain: during the last two years of McIntyre’s rule as superintendent, the school system overspent by $30 million, almost ten times the amount now needed by the schools to balance their budget. Some observers still remember that one year the school system received an additional windfall of $14 million in funding, which McIntyre and the former board spent in a single night.

A free-spending superintendent and penny-pinching mayor were certain to butt heads and McIntyre’s penchant for using one-time money in his budget as a continuing expense began to rankle both the mayor and the county commission. McIntyre finally resorted to pushing adoption of the largest property tax increase in Knox County’s history, aided daily by the Knoxville News-Sentinel and a $50,000 advertising campaign orchestrated by the Chamber of Commerce. Big-business types like now-gubernatorial candidate Randy Boyd came to urge commissioners to “do the right thing” by increasing property taxes. McIntyre packed the main auditorium of the City-County Building to the rafters with supporters, but the response from the public was swift and terrible.

So many citizens called the City-County Building, the telephone system crashed. A torrent of emails deluged the commissioners’ email boxes. Then-County Commissioner Mike Hammond, who had flirted with increasing the sales and property taxes, said at the meeting, “We got the message.” Apparently they did, as not a single member of the county commission dared to make a motion to increase taxes.

Financially, McIntyre and the former board of education never recovered. Neither did the News-Sentinel and the Chamber of Commerce. The failure of the tax increase was the start of News-Sentinel editor Jack McElroy’s vendetta against Tim Burchett. McIntyre continued to constantly live in the hope he could spend whatever he liked and the county commission would eventually be forced to give him more money.

Eventually, caught in a trap of his own making, McIntyre was desperate and forced to sign a Memorandum of Understanding with Burchett promising the school system would live within its means. The MOU had to be approved by both the board of education and the county commission and the agreement remains in place today.

Gloria Deathridge’s protestations aside, Bob Thomas, candidate for Knox County mayor to succeed Burchett, has gone on record as saying Knox Countians are adamantly opposed to paying higher taxes for any reason. Thomas’ opponents, Brad Anders and Glen Jacobs, have refused to take tax increases off the table. Burchett has been widely popular due to his vocal and highly visible refusal to recommend tax increases.

Yet hope springs eternal and apparently never having heard the old saying “avoiding one’s burden make the cross heavier to bear,” board member Terry Hill galloped to the rescue at the board’s regular meeting last week. Hill proposed delaying a vote on the budget, citing a conversation with State Representative Eddie Smith. Hill offered nothing more than vague assurances Smith was sympathetic to the school system’s plight. Hill had penned a letter to Representative Smith outlining the school system’s dilemma, hopeful the State of Tennessee will come up with more money for Knox County. Just why the State of Tennessee would want to pay a bigger portion of Knox County’s obligations for increased insurance premiums and teachers’ pensions was never explained by Ms. Hill who is notorious for her long-winded speeches detailing every side of every question before landing on one side or the other. Presumably, Terry Hill was simply feeling the heat generated by the residents favoring retention of Project GRAD and the magnet programs. Hill represents a district in northwest Knox County which includes Karns and Hardin Valley. In fact, many of the citizens speaking at public forum and contacting board members assailed the opening of two new middle schools, one of which is in Hill’s district. If Hill’s goal was to placate as many as she could, she failed miserably.

Superintendent Bob Thomas’ recommendation for trimming support for both Project GRAD and the magnet program has merit. Despite praise by some for the scholarships doled out by Project GRAD, the amount is less than five cents on the dollar of annual expenditures. Virtually any student in the state is able to go to college through the Tennessee Promise program. The Tennessee Promise program offers students two free years of college and the Hope Scholarship program will help carry qualified students through the rest of their college career. Curiously, the scholarships provided by Project GRAD equal almost to the dollar the interest income on a multimillion dollar investment account held by Project GRAD. The executive director of Project GRAD has been paid up to $140,000 annually, while the nonprofit spends over a million dollars on salaries. Local taxpayers provided just over $1 million in funding for Project GRAD yearly.

Despite the cries of “inequality” by some parents and pastors, inner city schools seem to do pretty well in per-pupil spending by the school system. For example, Knox County spends $10,612 per student at Austin-East, in contrast to $5,292 per student at Farragut. According to Knox County school records, 630 students attend Austin-East, while Farragut has a student population of 1,738. Spending per pupil at Bearden High School is $5,207 with a student population of 2,048.

The contention the magnet schools weren’t exactly providing an excellent education for students drew a furious response from many attending the board’s work session. Amber Rountree, South Knoxville’s representative on the board of education and a former librarian, was appalled to learn data from testing indicated 89% of magnet students read at “below proficiency.”

Most speakers seemed not to consider the possibility that not every area outside the city limits was “affluent.” It seemed not to occur there might be other students in Knox County outside of the inner city who are underprivileged, mired in poverty, or vulnerable.

Reverend Valentino McNeal, who likely could use a refresher course on the “Golden Rule,” bitterly excoriated members of the board. McNeal chastised the astonished Rountree, while flatly charging Hill as a “white supremacist.” McNeal urged that Hill be removed from the board or forced to resign. The good reverend also demanded Hill recuse herself from voting on the budget. McNeal also complained board Chair Patti Bounds had not “redirected and clarified some of the misguided presentations made by other board members,” not realizing Bounds had no authority to do so. McNeal huffed that Bounds should have run the meeting “in a more professional manner and displayed more sensitivity to the concern of the constituents,” none of whom was treated remotely rudely by any board member. McNeal simply didn’t like the fact that not every board member agreed with him. McNeal griped Rountree had “inaccurately” conflated “literacy data” as evidence Project GRAD and the magnet schools were not producing excellent educational results. McNeal charged Rountree’s wide-eyed surprise at the testing data was “an insult to people with common sense and especially those who have expertise in this area.” McNeal believed the comments made by citizens speaking at the public forum “refuted and rebuked” Rountree’s alleged “disingenuous and ill-fated attempt” to consider the reading data. Evidently, no public official has the right to question the hefty expenditure of taxpayer dollars on a program the good reverend feels benefits his own community. McNeal’s bitterness and heated remarks certainly fell far short of the biblical adage, “Judge not, lest ye be judged.”

Not surprisingly, some of the most eloquent and intelligent commentary, not to mention least polarizing, did not come from parents and pastors, but from students. One made the excellent point that perhaps it was best not to condemn other communities for what they have received, but instead to support one another.

In spite of Terry Hill’s last minute move to kick the can down the road in the hope that help may be on the way, board members may well find themselves on the horns of a different dilemma. As the board is hoping to “find” more money, others may well come to the trough to demand the board “find” even more dollars for them. The odds are mighty good the board will find itself right back where it started from, perhaps even in a worse spot before Terry Hill began to squirm and wheeze.