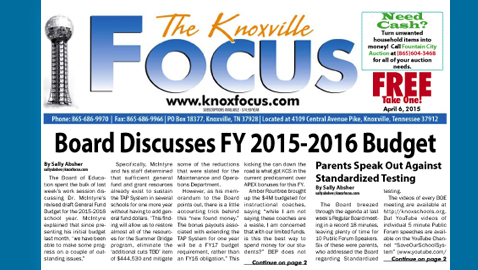 The Board of Education spent the bulk of last week’s work session discussing Dr. McIntyre’s revised draft General Fund Budget for the 2015-2016 school year. McIntyre explained that since presenting his initial budget last month, “we have been able to make some progress on a couple of outstanding issues.”

Specifically, McIntyre and his staff determined that sufficient general fund and grant resources already exist to sustain the TAP System in several schools for one more year without having to add general fund dollars. “This finding will allow us to restore almost all of the resources for the Summer Bridge program, eliminate the ‘additional cuts TBD’ item of $444,530 and mitigate some of the reductions that were slated for the Maintenance and Operations Department.

However, as his memorandum to the Board points out, there is a little accounting trick behind this “new found money.” The bonus payouts associated with extending the TAP System for one year will be a FY17 budget requirement, rather than an FY16 obligation.” This kicking the can down the road is what got KCS in the current predicament over APEX bonuses for this FY.

Amber Rountree brought up the $4M budgeted for instructional coaches, saying “while I am not saying these coaches are a waste, I am concerned that with our limited funds, is this the best way to spend money for our students?” BEP does not cover coaches in the funding formula, so the entire cost of coaches comes out of the general fund.

McIntyre disagreed, citing the Return on Investment (ROI) reports which said instructional coaches are a good investment. But later in the meeting, Harris said the first year ROI showed coaches were not a good investment, although that is improving. But if instructional coaches are not moving the needle on achievement, if the data doesn’t show a big enough ROI, he could see reallocating those funds.

Rountree also questioned a recent email detailing two added administrative positions for FY 14-15, including the Supervisor of Innovation and Director of Planning and Improvement. The latter is partially funded by the Broad Foundation. Rountree asked McIntyre to “please share when this board voted to accept funds from this group and provide a copy of said agreement to this board, and I also request a job description for those positions.” She also questioned the wisdom of kicking the can down the road regarding TAP funding.

Tracie Sanger noted a line item of $300K for paper, which she said “will buy a lot of Chromebooks.” She said that District 2 teachers overwhelmingly support instructional coaches. Gloria Deathridge concurred for District 1.

Terry Hill asked what will happen next year when the funding ends for Master teachers. This is the problem with using non-recurring funding (grants) for recurring expenses (personnel).

Patti Bounds (who taught for 25 years) said mentoring/coaching has always gone on. Veteran teachers mentored new teachers long before there were instructional coaches.

Carson asked if KCS needs to continue to provide “lifetime support” to the 11 personalized learning environment (PLE) schools when other schools are raising their own funds to purchase technology. But no one ever mentions when promoting computers for every student, it is not a one-time expense.

Harris certainly doesn’t understand this. He suggested the Mayor and Commission allocate an additional one time funding from the county fund balance (which he said is currently over $50M) to purchase technology. He said “$5M would fund about another 20,000 devices, which would be 35 – 40% of our students.”

The Board also briefly discussed the FY 2016 Capital Plan. Dr. McIntyre said he has not made final recommendations, but wanted to hear from the board. Terry Hill asked the board to be “proactive” in considering a new middle school for the Hardin Valley area. She said that the Middle School Solutions report was clear even though the projected 2019 may not support a middle school, the current population in the NW sector is already crowded and will be overcrowded, and rezoning is not a viable option.

Sanger agreed, but said the BOE needs to be reactive about the other schools that need capital improvements right now. She asked how we got to this point? Why did Adrian Burnett never get a new school? Bounds said that three elementary schools in District 7 have the most number of portables. Some of the portables are from 1980.

Lynn Fugate cautiously suggested that perhaps it was time to consider rezoning. Populations shift, fixed assets do not. This problem is not unique to Knox County.