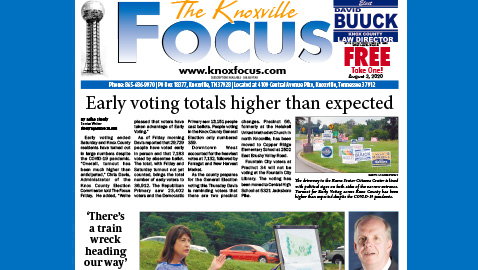 Early voting ended Saturday and Knox County residents have turned out in large numbers despite the COVID-19 pandemic. “Overall, turnout has been much higher than anticipated,” Chris Davis, Administrator of the Knox County Election Commission told The Focus Friday.  He added, “We’re pleased that voters have taken advantage of Early Voting.”

As of Friday morning Davis reported that 29,729 people have voted early in person and that 7,183 voted by absentee ballot. The total, with Friday and Saturday turnout not yet counted, brings the total number of early voters to 36,912. The Republican Primary saw 23,402 voters and the Democratic Primary saw 13,151 people cast ballots. People voting in the Knox County General Election only numbered 359.

Downtown West accounted for the heaviest votes at 7,132, followed by Farragut and New Harvest Market.

As the county prepares for the General Election voting this Thursday Davis is reminding voters that there are two precinct changes. Precinct 56, formerly at the Heiskell United Methodist Church in north Knoxville, has been moved to Copper Ridge Elementary School at 2502 East Brushy Valley Road.

Fountain City voters at Precinct 34 will not be voting at the Fountain City Library. The voting has been moved to Central High School at 5321 Jacksboro Pike.