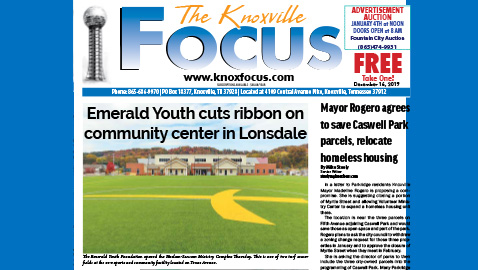 It features a pair of outdoor soccer fields, a gymnasium with four courts, a workout room, a café, which doubles as the concession stand for sporting events, an arts ministry room and a community room.

The 30,000 square foot facility is home to educational facilities and a health center, which is a joint venture run by Cherokee Health Systems and UT Medical Center.

The facility cost approximately $8 million and was funded by Dee and Jimmy Haslam and Elisabeth and Bill Sansom. The center will be leased to Emerald Youth Foundation for $1 per year.

The new complex required approval from multiple legislative bodies including Knoxville City Council, Knox County Commission, the Knox County Board of Education, as well as the board of Knoxville Community Development Corporation.

The City of Knoxville had a hand in the construction of the facility as it upgraded the infrastructure around the perimeter of the complex. The city added sidewalks, streetlight and other amenities.

Emerald Youth Foundation and Chief Executive Officer Steve Diggs was extremely grateful for all the people who made the new complex, which will serve both the youth and adults of the Lonsdale Community, a reality.

“My message as we open this facility is very simply one of gratitude,” Diggs said. “I am grateful to the owners who are not only contributing their resources to this project but believing with us that Knoxville is a city where every child, in every neighborhood, can have the opportunity for a full life.

“I am also grateful for the leadership of the Lonsdale neighborhood who had the initial vision for this project and worked all along the way to insure that it would become a reality.”

The facility celebrated its official grand opening in a ceremony Thursday afternoon, but members of the media were given a tour of the complex earlier in the day.

The tour was guided by Kevin DuBose, the director of Lonsdale Area Ministries for the Emerald Foundation.

“We have a Career and Calling Room where we offer educational opportunities for students until they finish college,” DuBose said. “We have ACT prep.

“We found that when you deal with the high-school aged, it is extremely challenging because those kids sometimes lose interest in education. We will provide services for students until they finish college.”

While the complex will provide educational and athletic opportunities for the community’s youth, which include volleyball, basketball, wrestling, futsal, soccer, flag football and lacrosse, the complex is also there for the adults and the elderly of the community.

Thursday’s tour began in the café, which serves as a concession stand for sporting events, but DuBose said it will mean more for the community.

“If you look, there’s no coffee shop around here, so we wanted this to also be a place where people from the community could come and have a meeting or a cup of coffee.

“And the children who came through our program will staff the café and that will give them the chance to get work and career experience and more importantly, a little cash.”

The facility’s health center will open on Jan. 6.

While Diggs expressed his gratitude, the ones who are really grateful are the longtime Lonsdale residents.

“Man, this is marvelous,” said longtime Lonsdale resident Joey Kyle. “I think our community deserved it and it’s been a long time coming and it means a lot.

“We’ve always been promised things but nobody ever delivered anything, and I was skeptical when I heard about Emerald Youth. But my wife was talking to my daughter about college and my daughter said she was through with school, then it was Emerald Youth that encouraged her to go to college, then I said I would get involved because it’s great when other people can reach your kid when you can’t.”