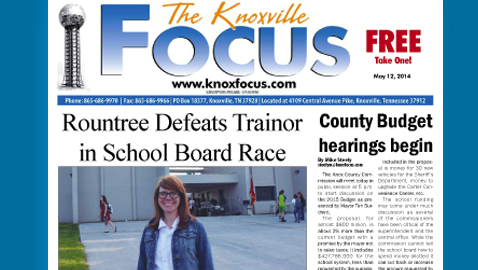 The first round of voting in the races for the Knox County Board of Education is over and there will be at least one new fresh fresh face sitting on the Board come September.

“I’m still in shock,” Amber Rountree said, following her victory last Tuesday.  “I can still barely believe it, but I’m very excited about the opportunity to serve the people of South Knoxville.”

Amber Rountree defeated incumbent Pam Trainor in the Ninth District, which is South Knoxville.  It was Rountree’s first bid for public office and she ran a near perfect race.  Moving through South Knoxville neighborhood methodically, knocking on doors and visiting with voters personally, Rountree’s message was being a strong voice for South Knoxville and refusing to be a rubber stamp for Superintendent Jim McIntyre.

Trainor, first entered politics six years ago after a failed bid to unseat then County Commissioner Paul Pinkston.  Two years later, Trainor came back and ran for the school board when incumbent Robert Bratton was surrounded by controversy.  Bratton failed to make the run off and Trainor faced businesswoman Tammy Summers in the general election, which she won.

During her four years on the Board of Education, Trainor faithfully followed the lead of McIntyre on virtually every issue.

Trainor’s campaign, like most every Board incumbent, was well funded by the Chamber of Commerce elite and she received the endorsement of the Knoxville News Sentinel.  At least one elementary school principal made robocalls on Trainor’s behalf and Superintendent McIntyre tried to help by releasing news of improvements at Mooreland Heights Elementary School and having a big media event for the revitalization of the old South-Doyle Middle School stadium.

None of it mattered, as Trainor failed to carry a single precinct in South Knoxville.

McIntyre’s personal popularity is almost nonexistent in South Knoxville and Trainor waged her reelection campaign almost solely on claiming that our schools are fine and dandy.  Clearly, the people of South Knoxville did not agree.

Amber Rountree’s vibrant personality, openness, and forthright stands obviously appealed to South Knoxvillians.  Rountree’s background in education was in sharp contrast to Trainor’s lack of experience, which consisted of volunteering with the PTA.

“People have no greater investment than their children,” Rountree said.  “South Knoxville deserves to have a Board member who is actively engaged and who will work hard for South Knoxville.