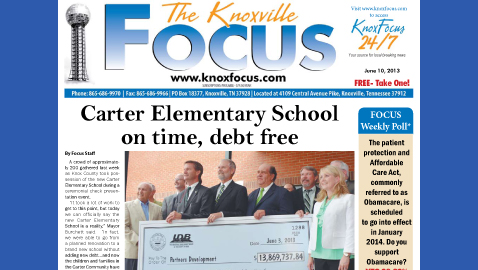 “It took a lot of work to get to this point, but today we can officially say the new Carter Elementary School is a reality,” Mayor Burchett said.  “In fact, we were able to go from a planned renovation to a brand new school without adding new debt…and now the children and families in the Carter Community have a new school they can be proud of.”

Knox County school board had previously voted multiple times to renovate the school’s existing campus. Yet, in 2011 Mayor Burchett announced that he planned to sell county property in order to generate $11.3 million for the completion of a new facility. The school board would then be responsible for the $2.5 million it had designated for renovations. The issue remained controversial throughout the funding process, but ultimately Burchett won the battle for a new facility.

The real victors, however, were members of the Carter community who had been advocating for a new school for decades.

The new building, located on Strawberry Plains Pike in East Knox County, is approximately 90,000 square feet and is designed to educate 650 students.

“Specifically, I want to acknowledge Commissioner Dave Wright and School Board Member Mike McMillan who never let me forget about the need for this school,” Burchett added

While construction crews still have some minor work left to complete, the new Carter Elementary School will be ready for students in time for the start of the new school year in August.  It is located at 8455 Strawberry Plains Pike between McCubbins Rd. and S. Molly Bright Rd.